WLS
By Evelyn Holmes and Alexis McAdams
CHICAGO (WLS) -- Chicago police are looking for a group of people who beat a 15-year-old girl and posted cell phone video of the attack on social media.

The disturbing recording shared on social media Monday night shows a 15-year-old girl being attacked on Chicago's South Side. In it, the victim is surrounded by at least five other teen girls and a teen boy before she's punched repeatedly as she screams for help. The alleged attackers range in age from 15 to 18 years old.

Friends of the 15-year-old victim said the group offered to walk with the teen to the CTA Red Line, but said it was all just a set up so they could jump her and videotape the beating.

"The family does know who these kids are and they are very upset about this because these kids took advantage of this young girl," said community activist Stringer Harris.

"It's very concerning and disgusting that the victim's so-called friends may be the offenders in this incident," said Officer Jose Jara, Chicago Police Department.

Police are working to track down the teens involved in the attack as well as the person who stood by and recorded the entire thing. The aunt of two of the teens involved told ABC7 her nieces turned themselves into police and are cooperating.

Supporters of the teen said the incident began when the girl, who is a high school sophomore who suffers from a mental disability, was not only beaten but, they claim, sexually assaulted after she refused to perform a sex act on a man the group all knew in exchange for a free tattoo. Other teen girls allegedly did perform the act.

Anyone with information is asked to contact Area Central detectives at 312-747-8380.
Report a correction or typo
Related topics:
chicagoattackbeatingcaught on video
Copyright © 2021 WLS-TV. All Rights Reserved.
RELATED 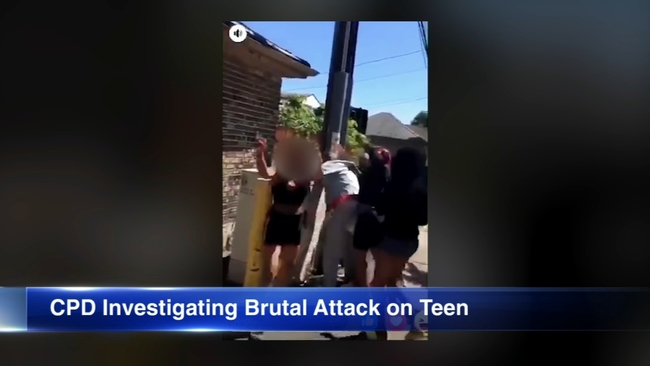