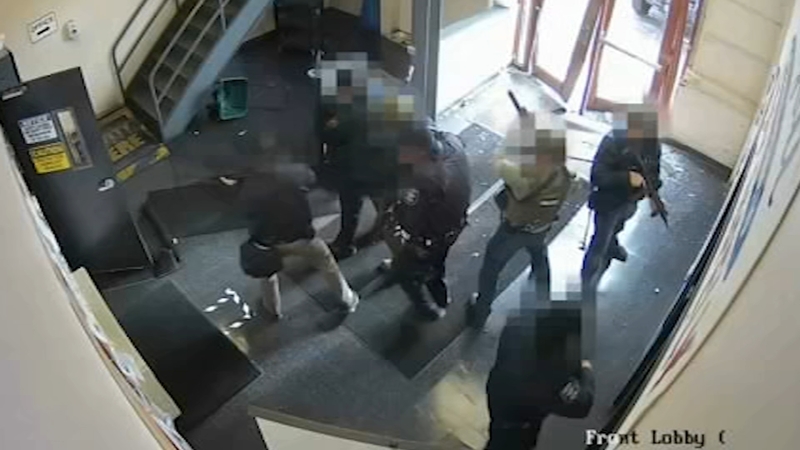 CHICAGO (WLS) -- The I-Team has obtained a new federal report that reveals how Aurora police handled the mass shooting at a valve manufacturing plant nearly seven months ago.

Illinois' worst mass attack in more than a decade took place when a just-fired employee went on a shooting spree inside the Henry Pratt Company.

The angry employee at Pratt fired 65 shots during the hour-long standoff with police, killing five co-workers and wounding five policemen before SWAT killed him.

"The Aurora Report" prepared by federal emergency management experts is what amounts to the anatomy of a mass murder case.

Aurora's police chief told the ABC7 I-Team, that the department "sought out FEMA to give an objective review of what we did right and what we did wrong." FEMA is the Federal Emergency Management Agency.

Chief Kristen Ziman said that the report determined "there were some things in there that we know we can absolutely do better" but that the department did many things well that day.

Consider this from FEMA: "Police did not have access to blueprints of the warehouse and were unfamiliar with the layout of the large facility" covering 29,000 square feet, nearly twice the size of Navy Pier's Grand Ballroom and filled with industrial machinery.

"It would've been absolutely unrealistic to take a thumb drive and plug it in, and these guys walking through the buildings with their shield and trying to look at a computer screen or a smart phone," Ziman said. "So we need to revert back to paper and so that was a big lesson learned, and that's the message that we're trying to send to a lot of businesses: to have those on hand so the officers know exactly where they're going in the building."

Although there is no requirement to provide the city with blueprints, police here now recommending businesses keep a "Go Bag" at the front door-that includes floor plans-for the next time police respond to an active shooter.

And consider: communications. "The lack of a common radio frequency among neighboring jurisdictions."

In other words, many responding police agencies arrived unable to talk to each other, some actually entering the building without checking in and with no radio contact.

"That could be catastrophic for law enforcement," Ziman said of the unsecured access.

And so, during the crisis, Aurora officials had to deploy their own officers and radios with each outside police team.

The solution is a special radio patch in the works to allow inter-agency communication.

"I think we are really close to it," said Ziman. "We've been working on this for several years and then of course this incident happened and then I say you could never actually prepare and so my senses that it will be within less than a year that we have this done."

Then there was the problem of retired, off-duty and neighboring suburban officers who showed up last February 15 with good intentions but no official assignment.

"The exact number of officers who responded is unknown" according to FEMA. But "self-deploying responders were cited as a major stumbling block."

"Some of them showed up in sweatpants no joke and were (saying) 'put me in coach where do you need me'," Ziman stated.

Nearly seven months later, in our interview, the chief is heartened by such a response...even though it points to the need for closer control, including the concept of scanning officers IDs when they enter and exit an active crime scene.

Federal inspectors identified 44 areas of concern, making dozens of recommendations in the report-many of which Aurora officials say have already been made.

Most important lesson she says: Go with the flow of active crime scenes. Be adaptable because things always change.

Only one of the five wounded Aurora officers has returned to work full time.