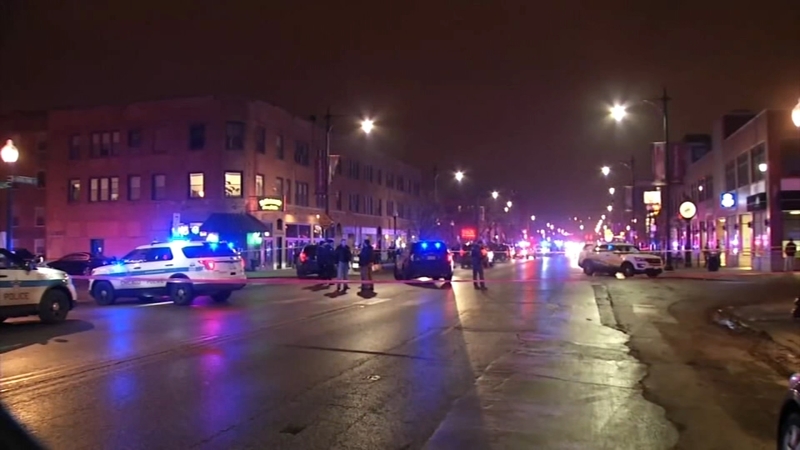 CHICAGO (WLS) -- A Chicago police officer and a 15-year-old boy are recovering after being shot in a "gun battle" following a bank robbery and police chase in Irving Park Tuesday night. The robbery suspect, who was killed, has been identified.

Christopher Terrell Willis, 32, died from multiple gunshot wounds, according to the Cook County medical examiner's office. Police said has a history of criminal convictions, including one for carjacking in 2002 in which he was sentenced to 17 years in prison. 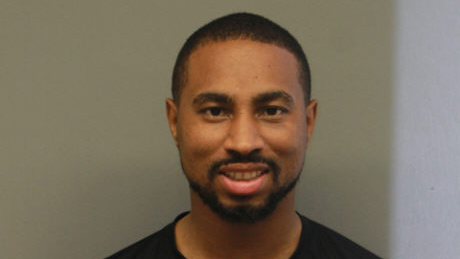 The CPD officer remained hospitalized Wednesday after being shot in the head following a bank robbery in Des Plaines and chase that ended on the Northwest Side. He was struck in the head when the suspect shot through his windshield, officers said, and suffered a skull fracture and bleeding on the brain, doctors at Illinois Masonic Medical Center said.

Police said Wednesday afternoon the 46-year-old officer's condition had improved and the bleeding on his brain appears to have subsided. He remains in serious but stable condition and is expected to make a full recovery.

"He's doing better, there was a marked improvement overnight," said First Deputy Superintendent Anthony Riccio. "He's now stable, the bleeding on the brain appears to have subsided, and we're optimistic he will make a full recovery."

While he remains in serious but stable condition, police said the CPD officer shot Tuesday night by a bank robbery suspect is expected to make a full recovery.

"The doctor said he is in serious but stable condition, and they were going to be monitoring his condition, particularly from a neurological standpoint," said Mayor Lori Lightfoot.

The officer's name has not been released, but CPD Superintendent Eddie Johnson said he is a highly decorated 17-year veteran of the force who works out of the 17th District in Albany Park. He has received more than 100 exemplary awards.

"It was a very close call for him, I think when people see the injuries they'll realize just how close it was for him," said Kevin Graham, president of the Fraternal Order of Police.

The officer is expected to remain in the Intensive Care Unit for at least another day so doctors can continue to monitor his recovery.

The teenager was an innocent bystander who was in the music store for a piano lesson at the time of the shooting, police said. He was struck once by gunfire from a Des Plaines police officer. The bullet entered in his arm and lodged in his chest, police said.

The teen remains at Lurie Children's Hospital where his condition is stable, and doctors are optimistic he will make a fully recovery, police said.

The police chase and subsequent gun battle that left a Chicago police officer and teenager seriously injured began with a bank robbery in Des Plaines.

The incident started with a bank robbery Tuesday evening in Des Plaines. Police there said around 4:30 p.m. a masked man entered a Bank of America and pointed a handgun at the teller, demanding money in a bag.

Des Plaines police said the bank teller put a tracker in the bag of money, which they used to follow find their getaway car on Ash Street. Officers were able to take one suspect into custody, but not the man who entered the bank, so the set up a large perimeter and searched with K-9 units for several hours.

They then got a call from a woman on nearby Pine Street who said she was held up at gunpoint by a man who demanded the keys to her Buick sedan.

Officers in the area spotted the car and the chase began.

"It was really fast, like racing cars, like five cars, I think, so they just chased after," said Stephanie Khong, witness, who lives nearby. "Cars after cars."

The chase ended in the 4200-block of Irving Park Road. Witnesses said police rammed the suspect's car. He then ran into a music store where he exchanged gunfire with a Des Plaines police officer.

Authorities said Willis was killed during the gun battle. Johnson said CPD officers did not fire any shots during the exchange of gunfire.

Des Plaines police said the officer involved in the shooting has been placed on paid administrative leave.

The teen who was shot is a student intern at UpBeat Music and Art, the store confirmed. They released a statement, saying in part, "Class was session at the time, and all other students and staff were kept safe, thanks to the quick and courageous efforts of our teachers.

"Our thoughts and prayers go to our student intern, and his family, the students and families impacted by this devastating event, as well as the Chicago police officer who was shot earlier in the pursuit."

The store said classes would be canceled Wednesday.

Lane Tech High School said the wounded teen is a student at the school. A crisis team was put in place Wednesday for any student who needed support or to talk.

The school released a statement saying in part, "It is with heavy hearts that we inform you that a current Lane Tech student was the innocent victim of a shooting incident yesterday, November 19. He is in critical condition, but we cannot release the name at this time. We ask that the Lane community keep this family in our hearts. We will continue to update you as we get information."

Mayor Lori Lightfoot visited with the boy's family at Lurie Children's Hospital Tuesday night while he was in surgery.

"It's obviously impossible for me not to think about his condition and the trauma to his family in light of my own status as a mother, and as a person who cares about what happens to this city," she said.

Joel Contreras was working inside Neighborhood Loans along Irving Park Road near Lowell and saw it all unfold, first with a patrol car colliding with the suspects white car.

"The first thing I thought it was just an accident," Contreras said. "Next thing I knew it was the driver or the suspect coming out of the car and then takes two immediate shots at the police officers.

"A lot of people started running away, just fearing for their life," said Bryan Lewis, witness.
"The bus driver pulled over about the middle of the block, next thing I know I heard pop, pop!" said Brian Deets, witness.

A woman who lives above the shop says she heard the shots got scared and took cover.