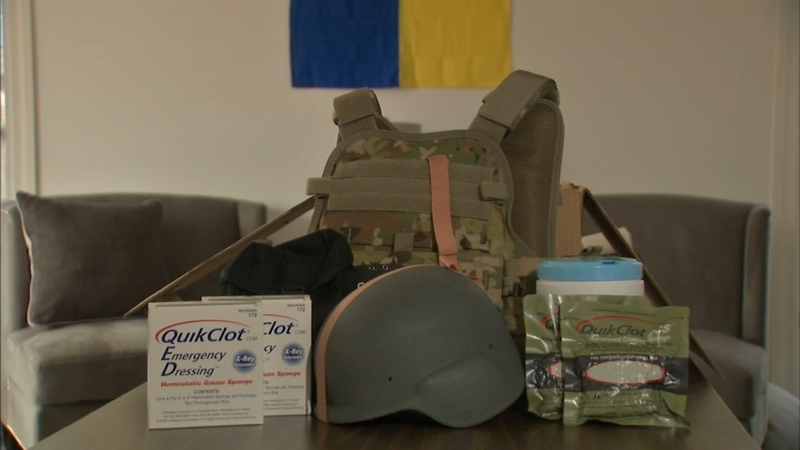 BARRINGTON, Ill. (WLS) -- A Barrington couple is collecting and sending donations to Ukraine, where Nick Nagorski's brother is preparing to join the fight against invading Russians.

Nagorski was born and raised in Ukraine, and has always kept close tabs on what's happening at home. Now, with the Russian invasion, he's trying not to fear the worst.

"To realize that my family and my friends' families are there and going through this, it makes me nauseous," he said.

READ MORE: Russia keeps up attacks in Ukraine as talks end without breakthrough

Nagorski's own brother is preparing to join the fight.

"My heart wants to be there, with my brother, but I also understand that I have a family here, I have kids here," he explained.

So Nagorski started a Facebook page called United for Peace Fundraising, to generate money and supplies to send to Ukraine. He emphasized the need for medical supplies like wound dressings, syringes and needles, and has turned his Barrington home into a staging area for the steady stream of donations.

His wife, Yana German, said she is thankful for the response to their plea for help on social media.

She FaceTimes regularly with a doctor in Ukraine, who said the country is under siege.

A pharmaceutical company out of Wisconsin just donated more than two pallets worth of medical supplies. Nagorski and German will take them to a warehouse where they are storing all of the items they've been collecting until those items can be put on a flight to Poland. Volunteers there will transport them into Ukraine.

In the meantime, he is hopeful Ukraine will win in the end.