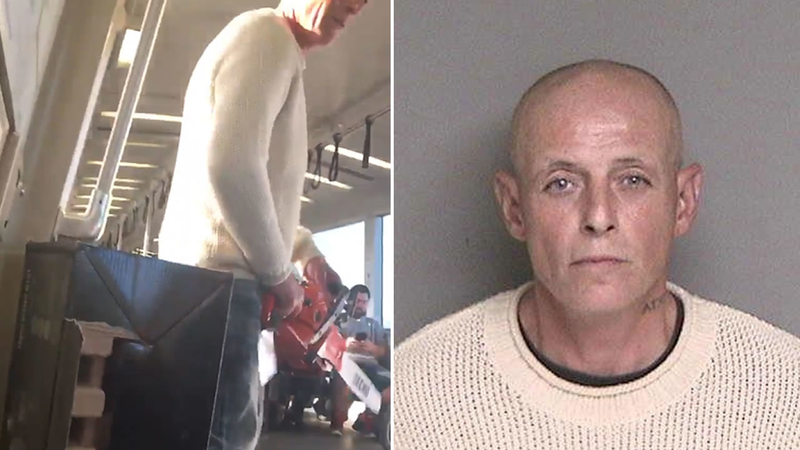 OAKLAND, Calif. -- The video looked like something out of a horror movie: a man wielding a chainsaw and appearing to practice starting the tool, then opening another box and pulling out a second chainsaw. But this nightmare was not on a movie theater screen, but on a BART train in the middle of the day.

The video was posted on Twitter Monday afternoon by a frightened passenger. Lasting nearly two and a half minutes, it starts with the man moving the first chainsaw up and down before saying, "This is so you don't cut off your freakin' head."

The man then turns to a nearby box and opens what appears to another brand new electric chainsaw. The man examines the tool for a bit before the video ends.

We've never seen anything like this before. Best thing to do is to snap a pic and send it to dispatch via BART Watch App. You can also go to another car and alert the train operator using the intercom. What train car are you on?

After the video was posted on social media, BART responded:

"We've never seen anything like this before," tweeted the official BART account. They asked the rider to take a picture, submit it via the BART Watch App and then move to another train car and get help.

Just after 5 p.m., BART confirmed on Twitter that they had received "multiple calls and officers quickly positioned themselves to board the train at Lake Merritt when the man actually got off. There was no waiting to respond, they acted within minutes."

Police received multiple calls and officers quickly positioned themselves to board the train at Lake Merritt when the man actually got off. There was no waiting to respond, they acted within minutes.

One rider said she saw the guy on a train from Fremont to Richmond but that BART police didn't respond and detain the guy until he got off at Lake Merritt.

BART says San Francisco resident Patrick Bingman, 47, was arrested for making criminal threats and for other outstanding arrest warrants. He was also issued a prohibition order and booked into Alameda County jail.

Officials say the chainsaws were never activated and there were no injuries. "We want to thank our riders for quickly reporting the unusual incident and our officers who quickly responded," BART said in a statement.

For more stories and videos related to BART, visit this page.

CHAINSAWS on BART. The woman who took the video of the man brandishing them tells her story #abc7news pic.twitter.com/mcXsRBqiot