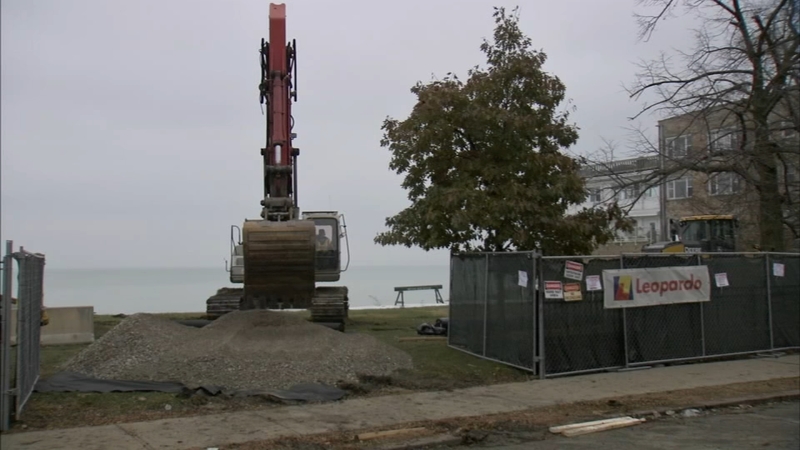 CHICAGO (WLS) -- High waves along the entire Lake Michigan shoreline have caused significant erosion at Chicago beaches, and some of the worst damage is in the Rogers Park neighborhood.

Construction on an emergency project started Monday at Juneway Beach, and will move south over the next couple of months to Rogers Beach and Howard Beach.

"The beaches are disappearing, Howard Beach for instance where I go, it used to be like 20 yards across, now at best it might be 10," said resident Brian Falk.

Lake levels are so high, waves are crashing into the back of several homes along the shoreline.

"I talked to an apartment dweller today, she's got to move out because the water is going through her brick wall into her bedroom," said Mark Kolsen.

It's a temporary fix officials hope will minimize further damage caused by the recent snow storms.

"The work is to place armor stone or riprap at these locations starting at Juneway to try and preserve what we have left, said Thomas Carney of the Chicago Department of Transportation.

Steps are also being taken to minimize flooding and damage along other parts of the city's lakefront.

"At 49th and 50th we're working with the Army core of engineers, they will be leading the operations of placing armor stone at that location on the south side," Carney said.

It's unclear how much the project will cost, or who is paying for it. In the meantime, emergency funds and money set aside for lakeshore restoration will be used.
Report a correction or typo
Related topics:
weatherrogers parkchicagobeachesbeach erosionlake michigan
Copyright © 2022 WLS-TV. All Rights Reserved.
TOP STORIES
Storm forecast to drop 1-3 inches of snow on Chicago area | Radar
Girl, 8, killed by stray bullet ID'd: ME
6 found dead inside Milwaukee home, authorities say
5 tax changes that can boost your refund this year
Woman finds $3M lottery prize in her spam folder
Family demands justice after 23-year-old woman found dead after date
COVID mandate draws protestors rallying against proof of vaccination
Show More
$45K raised for Bradley officer recovering from deadly hotel shooting
$6M worth of cocaine laced with fentanyl seized in Wisconsin
Chicago Weather: AM snow, mostly cloudy Monday
Woman killed in 'targeted ambush' at her birthday party in CA
Police lift SUV to rescue woman, 70, pinned underneath: VIDEO
More TOP STORIES News