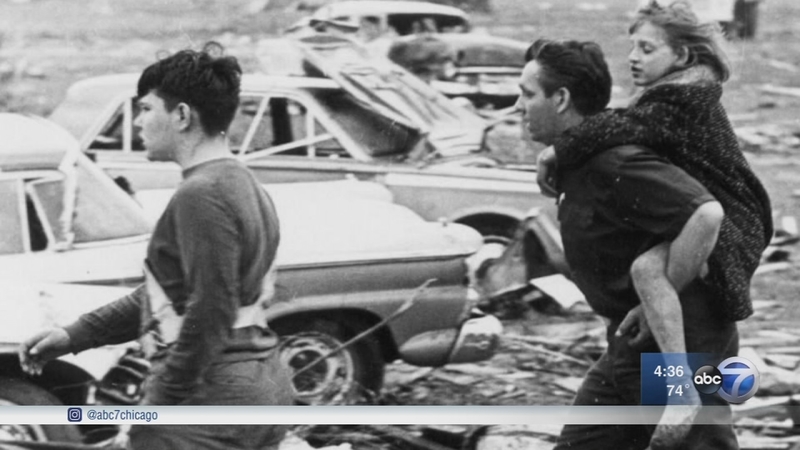 The sun disappeared. The sky darken with a greenish tint. But there was little warning of what was to come.

"The bus driver - who was my bus driver since kindergarten - he stood up and said, 'There's a tornado. Get down,'" said tornado survivor Teri Turner Keegan.

Keegan was a then-ninth-grader - aboard one of nearly 20 buses - parked nose to tail outside Belvidere's new high school at day's end.

The April 21, 1967 tornado, which killed 24 people - including 17 children - hit the Boone County town near Rockford, about 70 miles northwest of Chicago. It was the deadliest tornado in Illinois history.

The twister ripped the buses apart and tossed them like matchbook toys.

"And then it started to roll, and it probably rolled for what seemed like an eternity. I'm sure it was seven, eight, nine times," Keegan said recently.

The driver and two other students on Keegan's bus were killed.

Classroom doors were used as stretchers. The high school gym became a morgue. Shock. Confusion. A nearby hospital was hit, and then was overwhelmed with the injured -- some unidentifiable, their faces so blackened by dirt.

Children walked in fields of glass. Their shoes had been sucked off by a tornado with 260-mph winds.

And they didn't know it was coming.

There was a tornado watch in effect on that day 50 years ago, but the warning wasn't issued until just after 4 p.m. - nearly 15 minutes after the storm had hit the high school.

The straight line of devastation next hit DeWane's restaurant and livestock auction house.

A screamed warning from a veterinarian gave roughly 150 people two minutes to dive for cover.

"I just can't believe today - 50 years later - that in that two minutes it can do that much damage," said survivor Ray DeWane.

"You can't predict these paths but you can predict that there would have been a lesser loss of life had people known. Absolutely, I agree with that 100 percent," Doyle said.

Modern technology used to detect severe weather may have changed the outcome. But there is no going back, except through remembrance.

"It's important that we understand and make people aware of what happened so they don't ever forget what happened that day," Doyle said.

A funnel-shaped memorial at the high school helps that remembrance. It contains the names of the 24 people killed by the tornado.