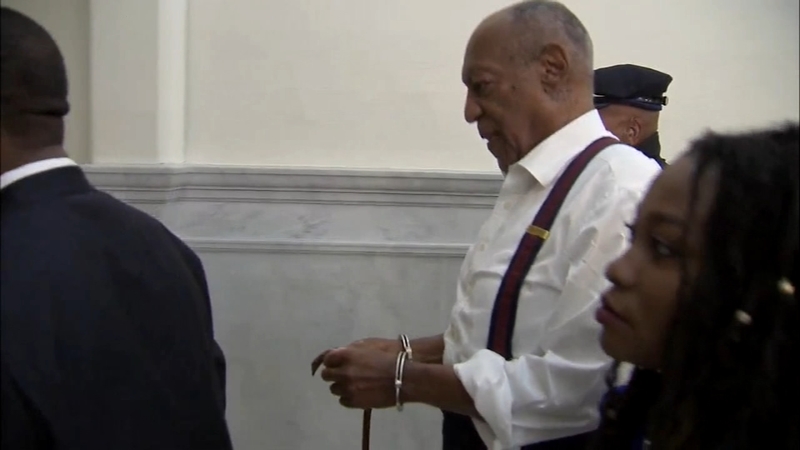 CHICAGO (WLS) -- At age 81, Bill Cosby was led away to prison on Tuesday in handcuffs for drugging and sexually assaulting one woman at his gated estate. Nearly 60 other women have come forward to report similar experiences, including three who say Cosby raped them in Chicago, or tried to.

1. Lisa Christie was an 18 year old model in 1989 when she says Cosby tried to assault her during what was to be a career counseling meeting.

Christie was attempting to transition from modeling to acting.

"I began to go on Jell-O commercials with him and he placed me as an extra on 'The Cosby Show' a couple of times," she said.

Cosby flew her to Chicago and they met at the Ambassador East Hotel where the TV dad suggested they do an acting exercise and asked her to kiss him "like a boyfriend," she said. She pushed him away, but says he told her, "I'll give you the biggest orgasm you've ever had!"

She says she rebuffed the TV star and told Cosby that she would sleep on the couch.

"The next morning as I was leaving the hotel room for my flight Bill said 'Call me tomorrow.' I said 'Bill, I will never talk to or see you again!' With Mr. Cosby I was one of the fortunate ones to escape."

2. Marcella Tate was 27 in 1975, she picked Cosby up at an airport and drove him to the Playboy Club in Chicago. She described having a drink and then having a cloudy memory
of being in a bed with Cosby beside her naked.

"I knew that I was in a sexual situation," she said in her statement. "I never intended to be in that situation and would never have agreed to any sexual contact with Mr. Cosby, but because I was barely conscious and felt drugged, I was unable to do anything to get out of it."

3. P.J. Masten, a former Playboy bunny, has said Cosby attacked her in 1979 at the Whitehall Hotel in Chicago. Masten, then in her 20's, said she arrived to a room full of Cosby's friends smoking cigars. He handed her a glass of cognac, but didn't remember anything after she drank it.

"The next thing I knew it was 4 o'clock in the morning and I woke up naked with this disgusting man next to me," she said on ABC7. "I have no idea what he gave me, but I woke up feeling very groggy and very sore. I knew I had been raped."

Cosby's sentence handed down Tuesday of three to 10years make him the first celebrity of the #MeToo era to be sent to prison and completed the dizzying, late-in-life fall from grace for the comedian, TV star and breaker of racial barriers.

"It is time for justice. Mr. Cosby, this has all circled back to you. The time has come," Montgomery County, Pennsylvania Judge Steven O'Neill said.

He quoted from victim Andrea Constand's statement to the court, in which she said Cosby took her "beautiful, young spirit and crushed it."

Cosby declined the opportunity to speak before the sentence came down, and afterward sat laughing and chatting with his defense team. His wife of 54 years, Camille, was not in court.

In a blistering statement, Cosby spokesman Andrew Wyatt said the comic was subjected to "most racist and sexist trial in the history of the United States."

Among other things, Wyatt said all three of the psychologists who testified against Cosby were "white women who make money off of accusing black men of being sexual predators," and he accused prosecutors of using a doctored recording of a telephone conversation between Constand's mother and Cosby.

Former model Janice Dickinson, who was also among the 60 or so women who have come forward to accuse Cosby of drugging and violating them over the past five decades, looked at him in the courtroom and said: "Here's the last laugh, pal."

Another accuser in the courtroom, Lili Bernard, said: "There is solace, absolutely. It is his fame and his fortune and his phony philanthropy that has allowed him to get away with impunity. Maybe this will send a message to other powerful perpetrators that they will be caught and punished."

Cosby's first trial in 2017 ended with a hung jury. He was convicted at a retrial that opened months after the #MeToo movement had taken down such figures as Hollywood studio boss Harvey Weinstein, NBC's Matt Lauer, actor Kevin Spacey and Sen. Al Franken.