Boy, 10, killed after minivan crashes into pond off I-90 in Huntley 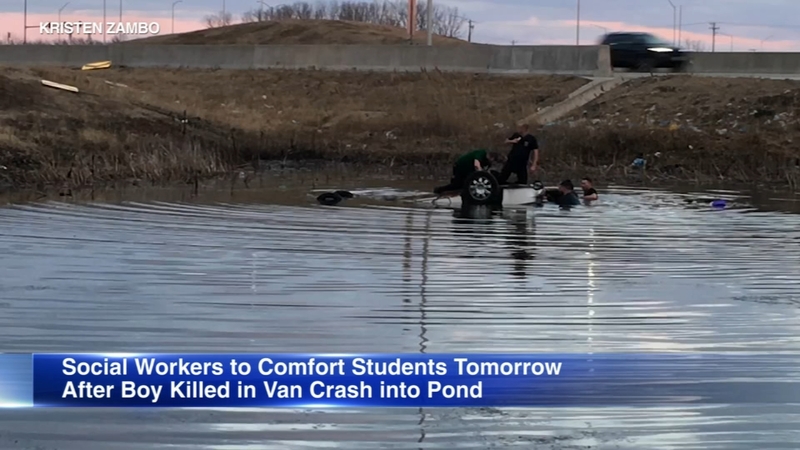 Boy, 10, killed after minivan crashes into pond off I-90 in Huntley

HUNTLEY, Ill. (WLS) -- A 10-year-old Addison boy was killed Sunday night after a minivan he was traveling in crashed on the Jane Addams Memorial Tollway in northwest suburban Huntley, Illinois State Police said.

Police said at about 6:50 p.m. a Chrysler minivan was traveling on the I-90 westbound ramp to Route 47 when it went off the road and flipped into a retention pond, where it became submerged.

Two witnesses were able to rescue the 38-year-old woman driving the minivan and a girl, police said. The woman's son was unresponsive when he was removed from the minivan and a doctor on the scene performed CPR on him.

The boy was transported to a hospital and pronounced dead at 8:25 p.m., police said.

The boy was identified as Cameron V. Simmons, 10, of Addison, according to the McHenry County Coroner's Office. An autopsy is scheduled for Tuesday.

Grief counselors will be on hand at the school to help students Tuesday.

The driver and girl sustained minor injuries and were transported to a local hospital.