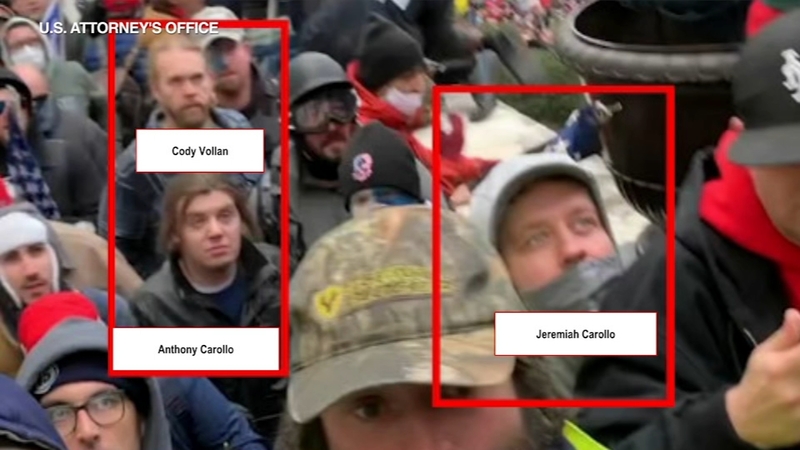 Of 27 Illinoisans charged in Jan. 6 attack, 10 have pleaded guilty

CHICAGO (WLS) -- Almost 16 months since the violent assault on the U.S. Capitol by throngs of Donald Trump supporters, the I-Team has tracked the Jan. 6 cases against more than two dozen Illinoisans and found a growing number of guilty pleas.

So far, guilty pleas from Illinois defendants are running higher than the national average in Jan. 6 riot cases. Now, court documents show that some other Illinoisans charged with Capitol attack crimes are considering guilty pleas.

According to the FBI, roughly 2,000 people were involved in this siege. So far, about 800 have been charged. According to the GW Program on Extremism's tracking database, 30% of those arrested nationwide have pleaded guilty or been convicted.

With Thursday's addition of three men to the list of those pleading guilty in Illinois, the state is running ahead of that national average.

"It's always in the government's interest-nearly always have the case plead out rather than go to trial. They don't run the risk of losing a trial. They don't have to expend the resources on taking a case to trial and they get a conviction," Soffer told the I-Team.

According to court records, eight of those charged in Illinois have delayed hearings to allow for possible plea discussions with prosecutors and review evidence.

Indian Head Park woman Leticia Ferreira, who was pictured in a Trump ski cap and seen entering the capitol, walking the halls and taking pictures herself, according to the FBI, is one of the cases for which court records show "the parties will continue to identify any remaining discovery and continue discussions about this case's resolution."

In another outstanding case, prosecutors say downstate Illinois resident Roy Nelson Franklin is seen on security cameras in the Senate chamber during the onslaught. Franklin was just indicted Friday and his attorney tells us they haven't yet had any plea discussions.

"There's a lot of evidence and a lot of it is very clear and it's indisputable. It's social media images and others," Soffer said. "The defense doesn't want to take the risk that they will be hit potentially with more serious charges or take the case through trial and face a judge who is now irritated this case was put through trial. So there's an incentive for both the government and the defense to plead."

If the Illinoisans currently with open cases all end up taking deals, then about two-thirds of the cases here will have avoided trial.