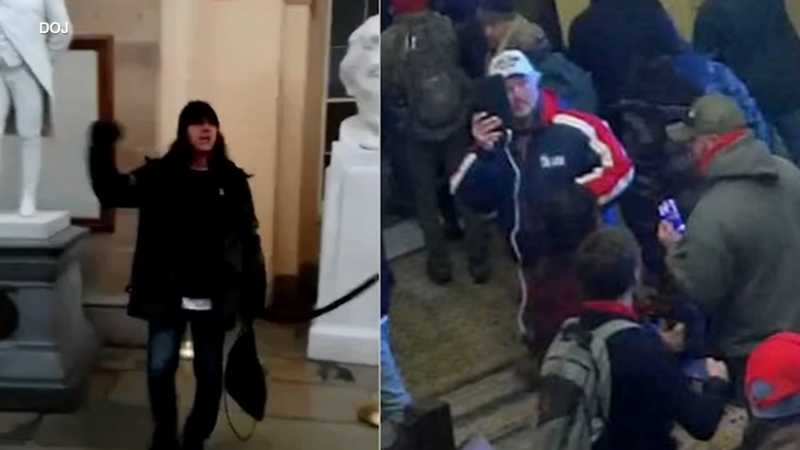 No jail time for 2 Illinois men who crashed US Capitol on Jan. 6

CHICAGO (WLS) -- Douglas Wangler and Bruce Harrison drove from Illinois to Washington, D.C. and admit they made a mistake by going into the Capitol building right along with the violent mob; posing with a statue of Washington on the inside and leaving no doubt they were there on January 6. But because they were not riot planners or violent intruders, a judge has given both men straight probation.

As crowds swarmed the U.S. Capitol on January 6, prosecutors said 53-year-Doug Wangler and 58-year-old Harrison, both men from the downstate Danville area, walked right in with them.

During their 20 minutes inside the Capitol, Wangler and Harrison sang patriotic songs, took some pictures and Wangler told a witness they were just "taking a tour" of the building according to the FBI.

The men had been at a Donald Trump rally a few blocks away where Harrison said he heard loud bangs and later told the FBI it sounded like "a civil war re-enactment."

But a few months later, after a tipster pointed authorities to Wangler and Harrison's presence inside the Capitol on January 6th, they were arrested and pleaded guilty.

The Illinois men appeared by video for sentencing at D.C. District Court Thursday. Judge Dabney Friedrich said they were among the "least culpable" of the more than 700 Capitol breach defendants and noted that unlike many they never celebrated on social media having been near the rioting by others.

The government wanted three years probation for Wangler and four years for Harrison, who had deleted some digital files from the D.C. trip. Judge Friedrich said the men committed serious misdemeanors but sentenced both of them to two years probation, 60 hours of community service and no fines.

Wangler told the judge he apologizes and "deeply regrets" what he did. Harrison said in court, "It was not worth it."