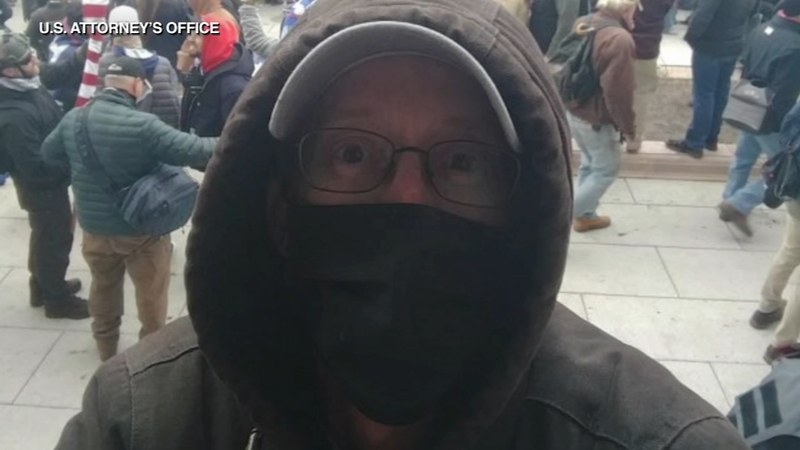 CHICAGO (WLS) -- A northern Indiana resident is the latest person accused of storming the U.S. Capitol on Jan. 6, 2021.

Jeffery Munger, of Goshen, is the 14th person from Indiana to be charged and arrested in the attack.

According to federal authorities, Capitol security cameras show the 55-year-old Munger climbing through a busted out window on the Senate side of the building, during the height of the assault on Jan. 6.

Munger is seen circled in red in photos, according to FBI agents who said that when they interviewed the Indiana man at his home last December, he pointed out on a map where he had entered the Capitol a little before 3 p.m. on the day of infamy.

They claim he also verified that was him seen climbing through a broken Senate window.

Investigators contend that clothing on the man climbing into the building matches the outfit Munger is seen wearing in selfies taken in front of the Capitol. And, they said he still has this coat worn on January 6 and an American flag logo ballcap.

Munger was inside the U.S. Capitol building about 14 minutes, according to security camera footage cited in the federal complaint.

Federal authorities said that is backed up by Munger's own pictures taken while in the Capitol.

Even though he was allegedly inside the building during the riot for a short time, GPS and phone records have him on Capitol grounds for more than one hour and ten minutes, according to the complaint.

Investigators claim Munger said he "never heard any commands from law enforcement officers to exit the building" and that he left after seeing people smoking marijuana in a Capitol hallway.

His newly appointed attorney has not responded with comment.