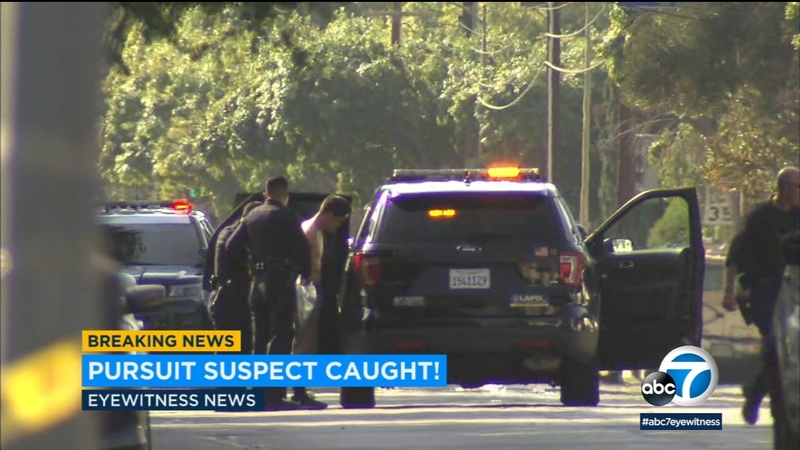 NORTHRIDGE, Calif. -- A California Highway Patrol motorcycle officer was transported to a hospital after a crash that occurred Thursday afternoon while the driver of a sedan was leading authorities on a high-speed chase on surface streets through the San Fernando Valley.

It was not immediately clear if any vehicles other than the motorcycle were involved in the crash, which occurred near Devonshire Street and Zelzah Avenue in Granada Hills. The officer, whose injuries were unknown, was conscious while being placed on a gurney and into an ambulance.

At one point during the pursuit, the suspect's car briefly slowed down near Balboa Boulevard and Blackhawk Street, and a man tumbled out of the front passenger seat and onto the pavement. Whether that individual was taken into custody was unclear.

The pursuit reached speeds of 70 mph and went through parts of Granada Hills and Porter Ranch before ending in Northridge.

At 1:40 p.m., the driver stopped outside an apartment complex in Northridge, exited the car and ran. Police immediately established a perimeter in the area and launched a search, supported by K-9 units.

Shortly before 4 p.m., authorities confirmed that the suspect had been apprehended. He was not immediately identified.