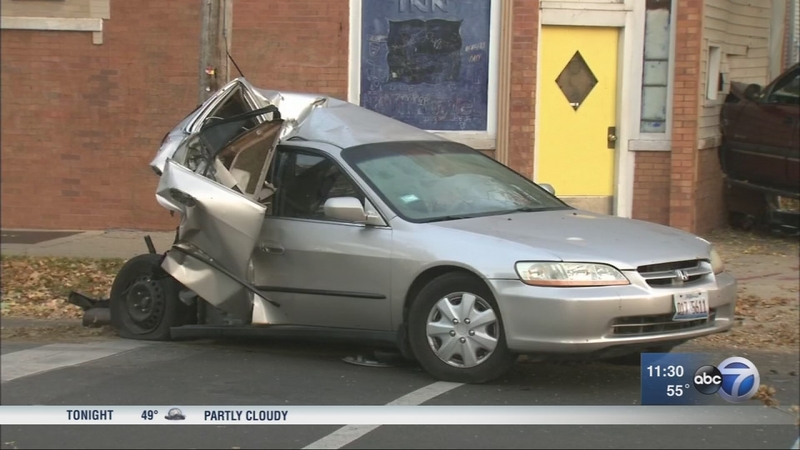 CHICAGO (WLS) -- A father and daughter were hospitalized after being violently rear-ended in a crash involving eight vehicles in Chicago's Brighton Park neighborhood. One of the drivers is in custody.

Police said three vehicles were involved in a collision around 5:55 a.m. at West 42nd Street and South Campbell Avenue, which caused damage to five other vehicles.

The 36-year-old father and his 16-year-old daughter were in a silver Honda that sustained extensive rear-end damage. They were taken to the hospital in good condition. Family members said the Honda was sitting at a stop sign when the three cars sped by. The Honda was rear-ended and pushed across the intersection.

A red SUV to end up halfway into a neighborhood bar. The bar owner said the business will be closed Wednesday for repairs.

Adriana Garcia a white 2002 GMC Envoy that was sideswiped. She was asleep in her home when the crash occurred and woke to see her car totaled. Garcia said she was forced to find an alternate way to get her children to school and to get to her job at a local pharmacy.

"It's my family's car, the only car we have," Garcia said.

"The damage of the cars is really unbelievable," said Melanie Mueller, who witnessed the crash.