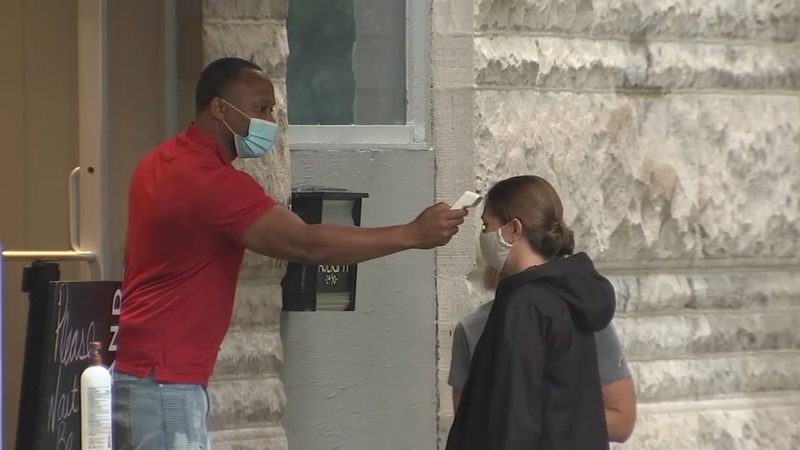 CHICAGO (WLS) -- Mayor Lori Lightfoot said she is willing to roll back some reopening measures in the city if COVID-19 cases continue to rise, especially among young people.

Mayor Lightfoot said since June 15, people age 18-29 make up 30 percent of the new COVID-19 cases. In the last month, the number of cases in that age group has jumped 29%.

"If you are in the 18-29 year old cohort, you are catching COVID-19. You are getting sick and you are not only putting yourself at risk, you are putting every single person that you come into contact with at risk," Lightfoot said.

The mayor said young people are not following the safety guidelines for face coverings and social distancing, resulting in a sharp increase in cases, and the bar scene may be the biggest problem.

"Right now we are on the precipice. We are dangerously close to going back to a dangerous state of conditions," she said.

The city is teetering on 200 new cases a day.

Mayor Lori Lightfoot said she's more than willing to roll back Chicago's reopening if cases in the city continue to rise, especially as spread among 18-29-year-olds continues to grow.

"I've had chats with certain people and they just do not care," said Sam Liggonah, who lives in Old Town. "They would rather be out and about socializing. They think it's worth it because it's driving them crazy, the isolation. I can understand that aspect of it."

"I have friends that are kind of, like, acting like life is completely normal and going to people's house parties and meeting complete strangers or, even, with dating," said Amy Harvey, who lives in Old Town.

And much of that behavior, health officials say, is happening at bars.

"I get it. People are being idiots, but it's really hard to stop. You can't stop a group mentality," said Charlie Quinn, who lives in Old Town.

Except, you can. And the mayor and public health director say they will.

"If we get to the point where we are up to 400 cases per day, that's the equivalent of where the states are that we are requiring quarantine for our visitors, it's the equivalent of needing to go back to Phase 3," said Chicago Public Health Commissioner Dr. Allison Arwady.

And while Lightfoot said that's the "last" thing she wants to do, she won't hesitate to do it.

"If we continue to see this uptick in cases, we are going to have no choice but to go back into Phase 3," she said. "That means shutting businesses down, that means imposing more restrictions on your mobility."

Lincoln Park zip code 60614 is where the greatest number of new COVID-19 cases appear to be centered, but every zip code in the city is seeing some sort of increase.

Officials are already cracking down on bars; Wise Owl in the West Loop was shut down over the weekend for violating city guidelines for Phase 4.

Bill Phan is doing everything he can to make sure his Lincoln Park bar, The Dime, survives.

"My line is, 'Guys, we've been closed for three months. I don't want us to close for another three months,'" he said. "We need to abide by these rules because it's not just about us."

For those bars playing by the rules, practicing social distancing with tables and requiring masks, the hope is that young people and other businesses heed the mayor's warning before it's too late.

"It definitely stinks to see that other places aren't taking it as seriously as we might, because we have worked very hard from the start to make sure that people are following the rules and we're enforcing them," said Emily Hernandez, general manager of Happy Camper.

A reversal to Phase 3 would once again shutter commerce that's just barely returned to operations.

Last week, Chicago announced a curfew for bars and restaurants that serve alcohol. They are required to close at midnight each night.