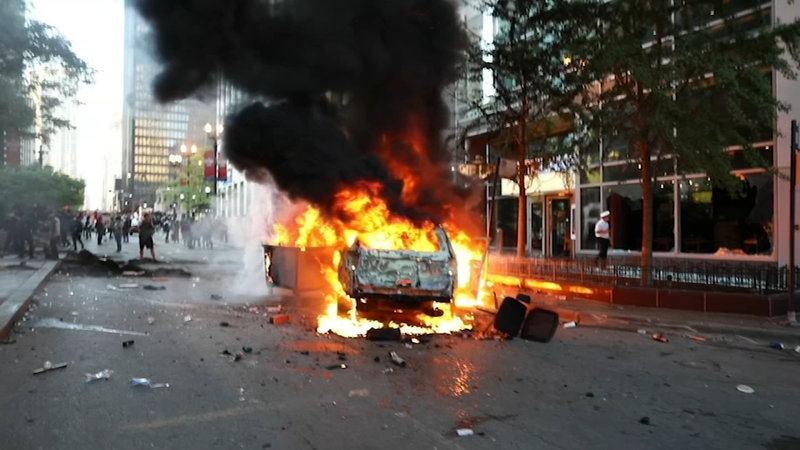 Anyone in the Loop looking to return home may exit on foot via the LaSalle Street Bridge or any direction south, the city said. CTA's buses and trains are running outside of the Loop.

In order to comply with the curfew, you must be on the way home. If you are in the Loop, you may exit on foot via the LaSalle Street bridge or any direction south. @CTA buses and L stations are open and running outside of the Loop. Please be safe.

The curfew comes after thousands of demonstrators marched through the streets in Chicago's Loop Saturday to call for justice in the death of George Floyd, a black man who died after a white Minneapolis police officer pressed a knee into his neck.

ABC7's Chopper 7HD flew over crowds of demonstrators in the Loop, where the CTA has temporarily suspended service due to protest activity. The northbound lanes of Chicago's Lake Shore Drive at Roosevelt are also shut down.

[Major Delays] Loop 'L' trains are running with delays near downtown Chicago due to protest activity.

Chicago police have not released any information about arrests from Saturday's protests. But chopper footage captured what appeared to be multiple people being taken in to custody, as well as damage to police vehicles, parked cars and vandalized buildings.

CPD Supt. Brown was in the midst of the protests with his troops Saturday.

"Dozens" of Chicago officers were injured during the protests on Friday, Brown said.

Late Friday night, a crowd gathered near Trump Tower before moving down State Street into the Loop about midnight. Marchers carried signs and chanted to protest the death of George Floyd in Minneapolis police custody.

Most of those arrested face disorderly conduct charges, but one individual was armed and faces additional charges, Brown said.

He also said about a dozen officers were injured. One broke a wrist, as protesters advanced on police, Brown said.

"Nothings changed police are still killing innocent people and getting away with it for nonviolent crimes," said Reid.

Reid said he was disappointed to see people protesting for what he said are the wrong reasons.

"Someone's life was taken at the end of it and smashing windows, trying to loot businesses isn't helping anything," he said Saturday morning.

Parking will be restricted from Chicago Avenue to Ida B. Wells Drive and Lake Shore Drive to Wells Street due to protests, officials said in an alert Saturday morning.

Earlier on Friday, marchers shut down several downtown streets as protests in response to the killing of Floyd were spreading to dozens of cities across the nation.

What happened to George Floyd is reprehensible. As CPD works to ensure you have the ability to express your First Amendment rights, we ask you to do it in a safe and peaceful manner. The safety of our residents, officers and the communities we serve is our top priority. pic.twitter.com/0w6AQf52rb

Lightfoot called out President Trump for his controversial tweet about the protests, saying "when the looting starts, the shooting starts."

"I will code what I really want to say to Donald Trump," Lightfoot said. "It's two words. It begins with F, and it ends with U."

Chicago activist Ja'mal Green traveled to Minneapolis to support the demonstrators, and cell phone video he took shows a police station lit on fire by protesters.

Chicago officials are restricting parking and shutting down CTA service in most of the downtown area Saturday during a Loop protest taking place in the wake of the Minneapolis police killing of George Floyd.

The parking restrictions will extend from Chicago Avenue south to Ida B. Wells Drive, and from Lake Shore Drive west to Wells Street, according to the Chicago Office of Emergency Management and Communications.