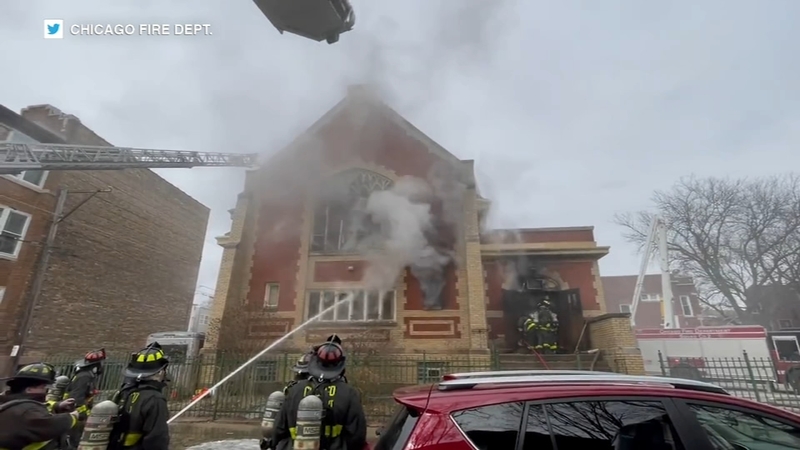 The Chicago Fire Department said at one point, the House on the Rock Church at Spaulding and Sunnyside was fully engulfed in flames. Just before 2 p.m., CFD said the fire was under control.

Chopper7 was over the scene Wednesday afternoon. The church appears to have sustained heavy damage and many of its large stained glass windows were destroyed.

Chopper7 was over a Chicago fire today that broke out at a church in the Albany Park neighborhood.

No injuries were reported. Neighbors said the church has been vacant for years.

A source told ABC7 that the Chicago Office of Fire Investigation is looking into the possibility of a connection between this fire and two others in the neighborhood this week.

Church was fully involved fire now under control. No injuries reported at this time. 4500 Spaulding pic.twitter.com/si3UbX1MVO

People who live nearby rushed home with heightened alarm.

"My roommate sent me a picture of the church in flames," said Ayme Frye, who lives across the street. "I came back home to make sure we didn't have to evacuate."

Dozens of families are now without a place to live after another fire just about five blocks away gutted an Albany park apartment building and the popular Twisted Hippo brewery in a massive early morning fire on Monday.
The fire knocked down the roof and west wall of the building that housed Twisted Hippo Brewery and Ultimate Ninjas Chicago, and it will likely need to be demolished, Mayor Lori Lightfoot's office said in a statement Tuesday.

Investigators have yet to determine a cause, but city officials said it's unlikely that unsafe conditions at an apartment building that burned played any role.

Then on Tuesday, a second fire in the neighborhood burned an apartment building that was under construction near Cullom and Spaulding. Wednesday's church blaze makes three fires in as many days.

"It's disconcerting, to say the least," Frye said. "I don't really know what to think about it."

"I don't have a reason to believe that right now, because I have talked to the experts and they have said that they haven't identified a pattern, so I definitely do not want to make people scared," Rodriguez said.