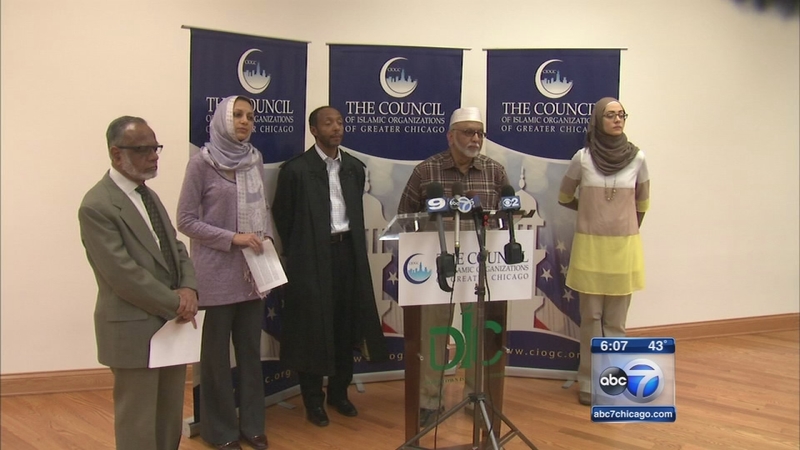 CHICAGO (WLS) -- Donald Trump's call to block all Muslims from entering the United States is causing deep concern at home, including in the Muslim community in the Chicago area. But it is also provoking concern from other faith communities.

Faithful Muslims are called to prayer five times a day, and at the Downtown Islamic Center in Chicago the afternoon midday prayer was followed by conversation.

"These are the tactics that have been used in developing countries in political campaigns," said Mohammed Kaiseruddin of the Council of Islamic Organizations of Greater Chicago. "They have tried to divide up one segment of the community versus the other, and it's very unfortunate to see that the same thing is happening here in America."

Members of the Council of Islamic Organizations of Greater Chicago in good times and in bad, and Tuesday they said they're living in a painful moment, especially for young Muslims born in America.

"On one hand, they're reminded that they're Americans and then on the other hand they're told to get out," said Tabassum Haleem, of the Council of Islamic Organizations.

Some Chicago-area Muslims want to Trump to repent and step aside, or, in the best case scenario, reach out to American Muslims.

Other people of faith joined to support Muslim Americans.

"We will be lighting one candle specifically in the name of religious tolerance and asking the members of our congregation who are the minorities today who need us to light menorah for them," said Rabbi Seth Limmer of Chicago Sinai Congregation.

As Rabbi Limmer celebrates Hanukkah he emphasizes the message of tolerance during the holiday, adding that Jews particularly understand the danger of hateful speech.

"We Jews in America need doubly to stand up for other religious minorities," Limmer said.

Members of the Council of Islamic Organizations say they have received many messages and signs of support from the community, and say they are encouraged and remain hopeful that America will continue to be welcoming to people of all faiths.