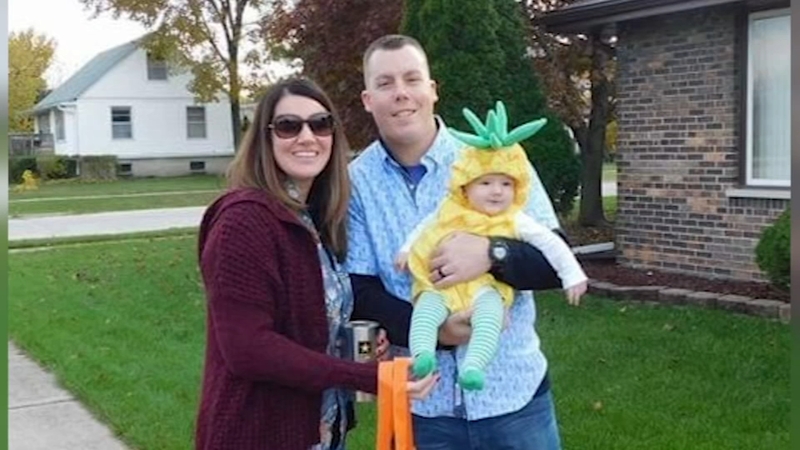 CHICAGO (WLS) -- Thousands gathered Friday morning for the funeral for one of the two police officers hit and killed by a train Monday night.

The Chicago Police Department celebrated the life of Officer Conrad Gary, 31, with full police honors. His wife, Kelly, held their 6-month-old daughter Tess outside of St. Rita of Cascia Chapel surrounded by family, and officers in uniform stood at attention to pay their respects.

"Kelly, I speak for the whole City of Chicago when I say we wish nothing more than for Conrad to have more time on this earth with you and Tess," Mayor Rahm Emanuel told the assembly.

Officer Gary's casket was draped in an American flag to honor his service in the U.S. Air Force.

"Conrad is a true American patriot, a true American hero. As an Air Force veteran, as a Chicago police officer, dedicated public servant who we will never forget," Rauner said.

Colleagues said Gary was "the go-to guy" at the police academy.

"Who among us, in a moment of crisis or chaos, would not want Conrad Gary to protect and defend us?" said Mayor Rahm Emanuel. "Who among us, at this moment of anguish, cannot help but be inspired by the bravery of a man who lived his life in service to others and high ideals."

"It was an honor to work with him. He will surely never be forgotten," said Officer Mark Mayer.

"I think I can speak for the entire 5th District that he will be missed and it will be every day that we remember him, may he rest in peace," said Officer Jeff Curia.

Officer Gary graduated from Eastern Illinois University in 2009 and spent more than five years in the Air Force, where he served as military police. He was a Southsider -- a Cubs fan, despite that -- and a peace keeper on the streets of Chicago.

RELATED: What we know about the 2 CPD officers killed by a train
Family members said he loved being a cop and described him as a loving husband and a devoted new father. He was also new to the force, only wearing the uniform for 18 months.

Monday night, Gary and his partner Officer Eduardo Marmolejo were looking for an armed man when they were struck and killed by a commuter train near 103rd Street and Cottage Grove Avenue.

"He died being a hero. He died doing exactly what we asked him to do: to protect the citizens of this city," said Johnson. "We owe it to his young daughter to always keep his memory alive."

Hundreds of people waited in line for hours Thursday night for the visitation of Officer Gary at Blake Lamb funeral home in Gary's native Oak Lawn.

"I think it says what people across this great city feel is that we all owe a great debt of gratitude to our police officers," said 19th Ward Alderman Matthew O'Shea.