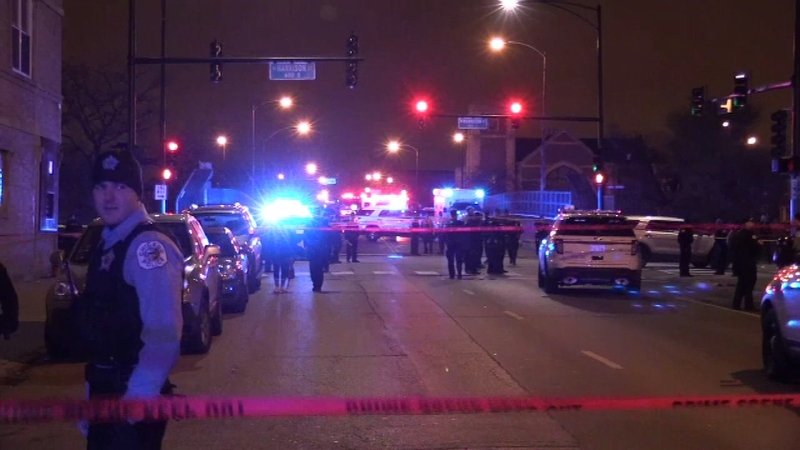 Police released a statement saying that the officers witnessed a shooting in progress in the 600-block of South Central Park Avenue at about 12:25 a.m. Friday. Police said the gunman was firing shots at two people and they immediately engaged the suspect, fatally shooting him.

The gunman shot two people, one of them fatally, police said. The other victim was hospitalized in stable condition with a gunshot wound to the arm.

The person shot by police was identified as 37-year-old Cleotha Mitchell of the 1300-block of South California, according to police and the Cook County medical examiner's office. The man allegedly shot by Mitchell was identified as 35-year-old Jeffery J. Banks. Both men were pronounced dead at the scene at 12:44 a.m.

"Officers while on patrol in the 11th District heard shots fired - responded to the scene of Harrison and Central Park and saw a subject standing over another subject shooting. The officers exited their vehicle, engaged that offender, and fatally shot him," said Chicago Police First Deputy Superintendent Kevin Navarro.

It's not clear what led up to the shooting. A weapon was recovered at the scene, police said.

"No officers are injured at this time and IPRA will be doing a follow-up investigation in terms of use of force with the officer," Navarro said.

The officers involved will be placed on desk duty for 30 days, police said. The Independent Police Review Authority is investigating.

The shooting occurred a little more than 24 hours after a Chicago police sergeant shot and killed 19-year-old Kajuan Raye of Dolton in the West Englewood neighborhood.

Surveillance video showed Kajuan running from the officer. Police said Kajuan matched the description of a person involved in a fight nearby and also had a gun and pointed it at the officer. Raye's family said that is not true and investigators did not locate a weapon at the scene.

Last Friday, officers said they shot and killed a man in the 2000-block of West 69th Street after they witnesses him kill someone, saying they fired back when the man wouldn't drop his gun.