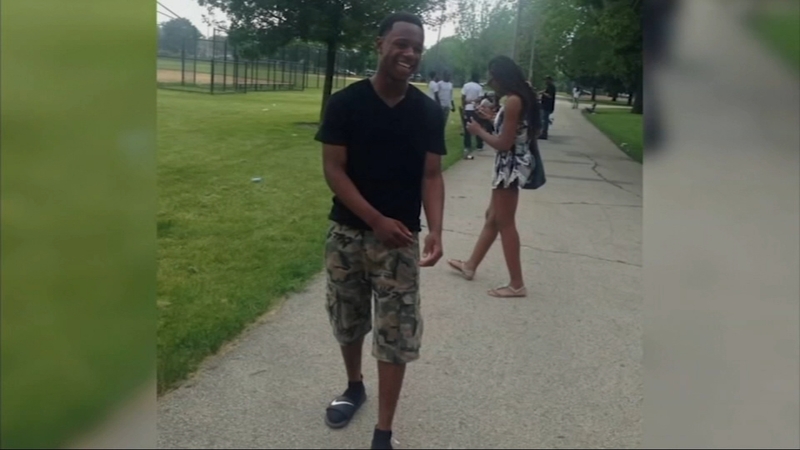 CHICAGO (WLS) -- On Monday 18-year-old James Garrett would have been celebrating his mother's 40th birthday with his family. Instead, his family stood in front of his classmates at Butler College Prep and celebrated his life, cut short Saturday.

Garrett was killed at a memorial for a family friend near 132nd Street and South Prairie Avenue over the weekend. A man and a woman started arguing and then both pulled out guns and started shooting. One of those bullets hit Garrett in the back.

Dr. Donovan Price was at the vigil. He said he got the call that Garrett had been shot as soon as he left.

"It's a dynamic in Chicago that's so terrible and it's heart-wrenching," he said.

"I didn't get to say goodbye to my brother at all. I haven't slept since Saturday. It's just not right," said Jameisha Garrett, the victim's sister. "I just always want my brother to live through everybody because he is a good kid."

"His loss means that we are lacking one more Black man, one more strong male. One more piece of our future is gone," said Rev. Elena Calloway, who oversaw a summer program that the teen just participated in. "The hardest part is we talked about all of this stuff."

One of the program's projects aimed to curb gun violence in the city. Calloway read what Garrett had written.

"He said, at age 18, 'I would end gun violence by having multiple meetings in the community about gun safety,'" she said.

Students held a vigil for Garrett, with most of the school participating. They all wore black and held candles in his honor. They then shared stories of a young man always laughing and joking, but with very serious aspirations of becoming a teacher.

Price hopes Garrett will continue to serve as inspiration to his peers.

"So maybe there will be more young people who will be willing to try harder, and go harder and work harder because they know it's possible to have a future. It's possible to be great, even in Chicago," he said.
Report a correction or typo
Related topics:
chicagochicago riverdalepullmanchicago shootingchicago crimeteen killedvigilstudent dies
Copyright © 2022 WLS-TV. All Rights Reserved.
RELATED
HS senior fatally shot on Far South Side had aspired to be a teacher
1 dead, 2 injured in shooting at memorial on Far South Side
TOP STORIES
3 shot, 1 killed at WeatherTech facility; Fernwood man charged: police
Hearing set for teen accused of killing, sexually assaulting girl, 10
Thousands gather at Trump rally in Quincy to see the former president
Girl, 4, dies of 'multiple injuries' from child abuse in Chatham
Abortion rights supporters gather in Chicago for 2nd day after ruling
Bald eagle snatches Yorkie off porch: VIDEO
5-month-old girl shot in head, killed in Chicago ID'd by ME
Show More
Brian Laundrie confession letter released: 'I ended her life'
15 shot, baby among 3 killed in Chicago weekend violence, CPD says
Leaders concerned about effectiveness of cameras in Chicago parks: BGA
Presumed monkeypox case reported in suburban Cook County: CCDPH
Abortion rights supporters fill the streets of cities nationwide
More TOP STORIES News