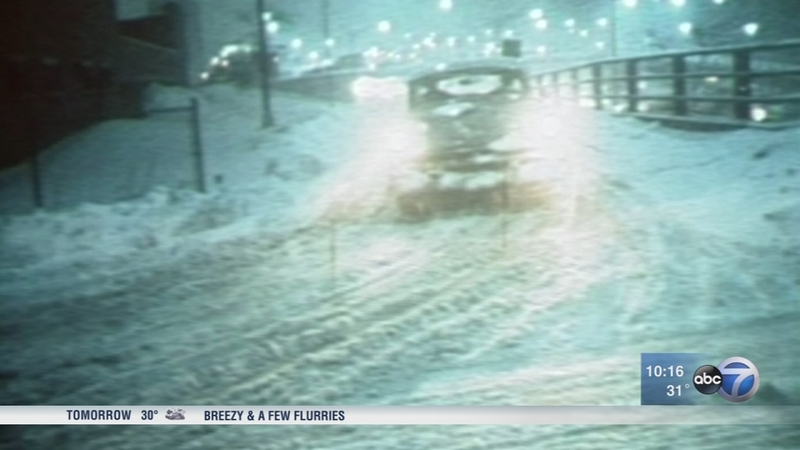 The forecast that day only called for four inches of snow, but the Chicago area ended up getting nearly six times that.

It was the day everything in Chicago came to a halt. The snow started on the morning of January 26 and didn't stop until the next morning, leaving 23 inches of snow on the ground.

The forecast that day in 1967 only called for four inches of snow, but the Chicago area ended up getting nearly six times that.

At Midway International Airport, 53-mph wind gusts were recorded. Snow drifts were as high as 6 feet in some areas.

The Maywood Fine Arts Association posted a video on YouTube of a couple who will celebrate their 50th wedding anniversary this year and has a special tie to the blizzard.


The winter storm forced Lois and Ernie Baumann to postpone their wedding, since no one could get there. So, their 50th anniversary is linked with the 50th anniversary of the biggest blizzard in Chicago history.

"There was no bride's dress, no tuxedos, no guests arriving, everything was closed," said Lois Baumann.

"Couldn't get to the church. Couldn't do anything," said Ernie Baumann.

Everyone who was alive during the blizzard of '67 has a memory of it. The Chicago History Museum has a good collection of pictures of some of the city's snow-covered streets. Transportation came to a complete halt in the city.

"Fifty-thousand cars basically stopped in the street. Eight hundred CTA buses stalled that had to be removed later. Really, the city shuts down because of this weather event," said Joy Bivins, Chicago History Museum.

Current Streets and Sanitation Commissioner Charles Williams was 15 at the time of the blizzard. In his current position, he now deals with storms much differently than they did then.

"In 1967, you didn't have that many snowplows in the city. Basically they put a plow hitch in front of a garbage truck and that was the plow," Williams said.
Jon Steinhagen has written a play called "Blizzard '67" that features four men in a carpool who get stranded in the storm. Thursday night's show has been sold out for weeks at the 16th Street Theater in Berwyn.

"The story of an entire city being shut down by an act of nature," Steinhagen said.

"So many people that come, they do see little snippets of their own life," director Ann Filmer said.

It took the city a week and a half to dig out after the storm. Back in those days, the city didn't even plow the side streets. Residents had to get out their shovels and dig themselves out.
Report a correction or typo
Related topics:
weatherchicagomaywoodsnow stormblizzard
Copyright © 2022 WLS-TV. All Rights Reserved.
TOP STORIES
5 tax changes that can boost your refund this year
Family demands justice after 23-year-old woman found dead after date
Chicago weather forecast includes snow into Monday | Live radar
Girl, 8, killed by stray bullet ID'd: ME
Fauci optimistic omicron will peak in February
Overdose investigation leads to $6M worth of cocaine in Wisconsin
After the omicron wave, what's next for the COVID pandemic?
Show More
2022 inflation: Expert tips to navigate food, gas prices rising
Illinois driver's license facilities to resume in-person services
19 shot, 4 fatally, in Chicago weekend violence
Rescuers use sausage dangling from drone to lure runaway dog to safety
`Dreadhead Cowboy' pleads guilty to animal cruelty charge
More TOP STORIES News