Chicago Weather: Storms cause damage across suburbs; give pro golfer a scare 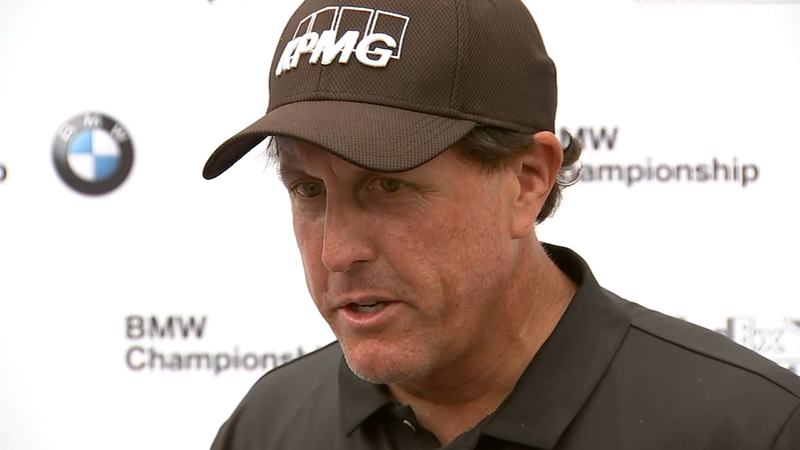 Crews were cleaning up downed tree branches in Bolingbrook, and one resident of the southwest suburb saw serious damage to his home.

Some severe storms Sunday left damage across the southwest suburb of Bolingbrook.

The weather even put a professional golfer at risk of missing his tee time at the final round of the BMW Championship in Medinah.

Phil Mickelson's hotel in nearby Itasca was hit by lightning Sunday morning, causing an evacuation.

"I can't get back into my room and may miss my tee time because I am without clubs and clothes," Mickelson tweeted.

How’s this for crazy? My hotel was struck by lighting, I was on top floor,we were evacuated and the place is on fire(only thing of mine on fire this week.) I can’t get back into my room and may miss my tee time because I am without clubs and clothes.

The golfer later explained that the hotel building was struck by lightning right above him, which blew out a brick chimney and caught fire.

Some golf fans were in the nearby parking lot at the time.

"We heard it was right over here at the hotel about 200 yards away from where we were parked," said Mike Maloney.

"I mean, boom, it scared us, because it felt like it was right on top of us," Childs said.

Luckily, Mickelson was able to make it to the tournament in time.

"I guess there were 10 fire trucks, so I got in my car and left. Couldn't get back, the roads were closed and the hotel was closed. But things cleared up pretty quickly. I was able to come back in and get my clubs and play," he explained.

Mickelson even joked with reporters after the final round, calling his week in Illinois "electric."

The BMW Championship wasn't the only event affected by the severe weather.

The Chicago Air and Water Show saw some delays Sunday.

Air and Water Show Update, Per NWS, Weather conditions continue to improve! The show is scheduled to start at 12 pm at North Ave. Beach.

But once the skies cleared, they were filled with the roar of planes from the Royal Air Force's Red Arrows to the acrobatics of Susan Darcy.

The storms also caused several power outages in the city.

courtesy of the Thompson family in Oakbrook. This occurred around 7:30 Sunday morning.

At least 23,000 people were without power in the Chicago area Sunday morning.

Meanwhile, around 204 flights had been canceled at O'Hare International Airport as of 8:13 a.m., with most other flights being delayed 42 minutes or more, according to the Chicago Department of Aviation.

At least 23 flights had been canceled at Midway International Airport as of 8:13 a.m., the department said.

Heavy rain by far is the most widespread impact from these storms. Isolated strong winds and large hail are possible. Storms are moving from west to east; expect partial clearing starting later this morning. @ABC7Chicago #Chicago #Storms pic.twitter.com/nifarYxGDv