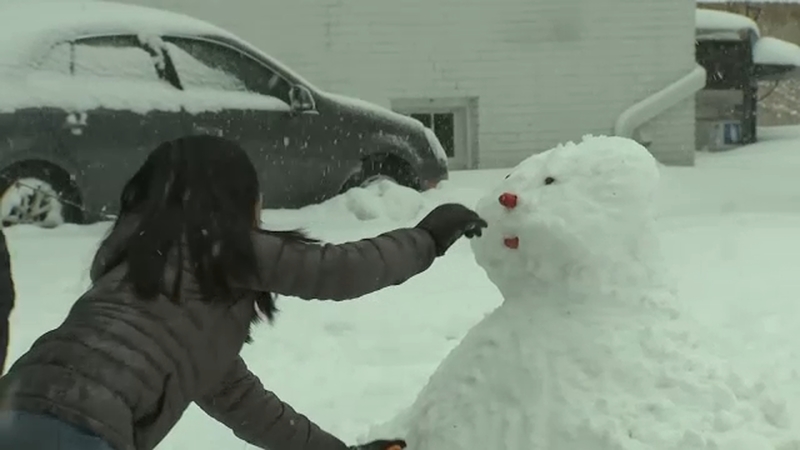 Weekend snowstorm adds up to biggest in over 5 years

CHICAGO (WLS) -- The weekend Winter Storm Warning has expired, but light snow is expected to continue into the evening for the Chicago area and much of Northwest Indiana.

The accumulation total makes the snowstorm the biggest in our area in over five years, making it the greatest two-day storm since November 20-21, 2015, according to ABC7 Meteorologist Phil Schwarz. 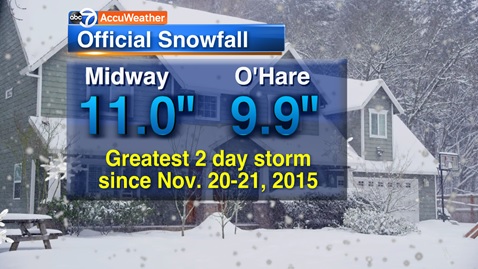 While forecasters expect 5-9 inches of snow Sunday, Schwaz added that so far some places have seen over 10 inches of accumulation. O'Hare has recorded 9.9" as of 6 p.m. Sunday.

The warning went into effect at 3 p.m. Saturday and expired at 6 p.m. Sunday.

By Sunday morning, 7.4 inches of snow had fallen at Midway Airport and 6.8 inches were reported at O'Hare Airport, according to the National Weather Service.

Some areas outside of Chicago recorded over 9 inches of snow by Sunday. These isolated higher values are likely due to contributions lake effect snow, forecasters said.

"It's going to be very heavy, wet snow," National Weather Service forecaster Brian Leatherwood said. "So anybody trying to deal with it manually, they need to be careful."

Snow is expected to taper off by the afternoon as the storm moves northeast out of the city.

With strong wind and low visibility, the storm will continue to make for treacherous driving conditions and potential lake shore waves up to 11 feet tall, forecasters have warned. Northern and central Cook County will remain under a lakeshore flooding advisory until 3 a.m. Monday.

A Winter Storm Warning has been issued for the Chicago area and much of Northwest Indiana from Saturday afternoon through Sunday evening.

City officials said 287 snowplows were deployed across Chicago Saturday afternoon ahead of the first flakes. More than 315 trucks are expected to be on the roads by Sunday morning.

"I know... some people have no choice, but I would not go out if it can be avoided because it's just not going to be a good situation," Leatherwood said.

"It's going to be challenging just for the road crews to keep up with that amount of snowfall," Leatherwood added. "And then, of course, visibility is going to be limited, it's going to make it even worse."

While the snow may be beautiful, some are having a rough time as they try to keep up clearing it away, especially on unplowed side streets.

Dangerous conditions on the expressways also led to several accidents. On the southbound Dan Ryan near 47th Street, two separate pileups took place leading to at least two people being injured, ambulances called to the scene and the express lanes closed for nearly an hour.

In the city, sidewalks are a mess, with many people having to walk on the streets where crews have been working nonstop since 2 p.m. Saturday. The entire fleet of Streets and Sanitation trucks have been crisscrossing Chicago to ease passage for drivers, especially as the weekend draws to a close.

"We want to get into those neigbhorhood streets just as fast as everyone wants us to get in there," said Cole Stallard with Streets and Sanitation. "We're looking at this. We're just hoping this system gets out of here and then we will be getting into those residential streets, and we just ask that everyone help each other out."

Keep in mind that crews do not clear alleyways.

Officials also ask residents that as they clear their vehicles and sidewalks, don't shovel the snow onto the street, as it just makes it harder for crews trying to clear the roads.

As the snow eased Sunday morning, the winds changed from west to east, brining a round of lake-effect snow, which could dump another inch or two on Chicago and south suburban Kankakee.

A Winter Storm Warning has been issued for the Chicago area and much of Northwest Indiana from Saturday afternoon through Sunday evening.

Out of four million customers, COMED is reporting only 432 customers without power Sunday night. They said the most affected is in Deerfield where 156 are without power, compared to only eight customers affected in Chicago.

From plow to pizza, Chicago prepares

"A small snowstorm of three to four inches could turn into seven to eight inches, just the way the wind is blowing and the temperature around the lakefront," Giudice said. "We urge residents take precautions plan accordingly and allow extra time while driving. Travel could be very difficult due to very low visibility and snow-packed roads."

They said main roadways would be tackled first, and advised anyone parked along the lakefront to move their cars as high waves are expected.

The Illinois Department of Transportation and Illinois State Police are also asking the public to avoid unnecessary driving during the storm. they said heavy show should be anticipated which could create slick roads, reduce visibility and make travel times much longer than normal.

"Our snow-and-ice teams will be ready and out in force, but with this latest round of winter weather happening over the weekend, the choice of staying indoors should be strongly considered," said Acting Illinois Transportation Secretary Omer Osman. "If driving is necessary, know that conditions at times could be treacherous. Buckle up. Slow down. Put down the phone. Give our plows room to work. And build plenty of additional time into your schedule."

Statewide, IDOT has available more than 1,800 trucks and equipment to apply salt, treat roads and respond to weather emergencies. If you encounter a plow or any maintenance vehicle during your travels, please slow down, increase your driving distance and remain patient.

"If you must travel during snowy or icy weather, please remember to manually turn on your headlights, pay attention and increase following distance when driving," said Illinois State Police Director Brendan F. Kelly. "Most importantly, remember to slow down and move over for all emergency vehicles and tow trucks with their emergency lights activated on the side of the road. This also includes motorists with their hazard lights activated."

Parking lots have been cleared and piles of snow neatly stacked after Tuesday's storm, and now snow plow operators are gearing up for round two.

"I imagine I probably won't go out 'til 12, 1 a.m. in the morning, because most of the people don't want to have us do it 'til they get up in the morning," said Sean Greaney, who owns a snow blowing business.

He books jobs through an on-demand snow removal app, and after a few dry winters it's welcomed work.

"You just look at the dollar signs; that's how I look at it, gotta make it when you can," he said.

The same goes for delivery drivers and chefs.

"Pizza's been huge during the pandemic," said Matthew Wilde, owner of Bob's Pizza in Pilsen.

In normal times, a snow storm on a Saturday night would be something akin to the Super Bowl for pizza makers. Now it's more like double that. But Bob's is ready.

With strong wind and low visibility, the storm will continue to make for treacherous driving conditions and potential lake shore waves up to 11 feet tall, forecasters have warned.

Other tips if you must travel:

Some people on the city's North Side put the snow to good use and built this giant snowman.

An ABC7 photographer said it's about 15 feet tall and had some kids stand in front of it for perspective.

Residents on Chicago's North Side built a giant snowman that is said to stand at least 15 feet tall!

National Weather Service officials say a storm moving across southeastern Wisconsin along with a system earlier in the week and lake-effect precipitation has left Milwaukee and other areas with snow depth totals not seen a decade.

U to 10 inches of snow has fallen in parts of Milwaukee, Ozaukee, Racine and Kenosha counties, according to a report from The Journal Sentinel.

Combined with heavy snow from Tuesday, there are snow depth totals above 15 inches in many areas near Lake Michigan.

The weather service says the last time the area had 15-inch snow depth totals was in the 2010-2011 winter season. Another 3 to 4 inches could fall in southeastern Wisconsin, with possibly more by the lake.