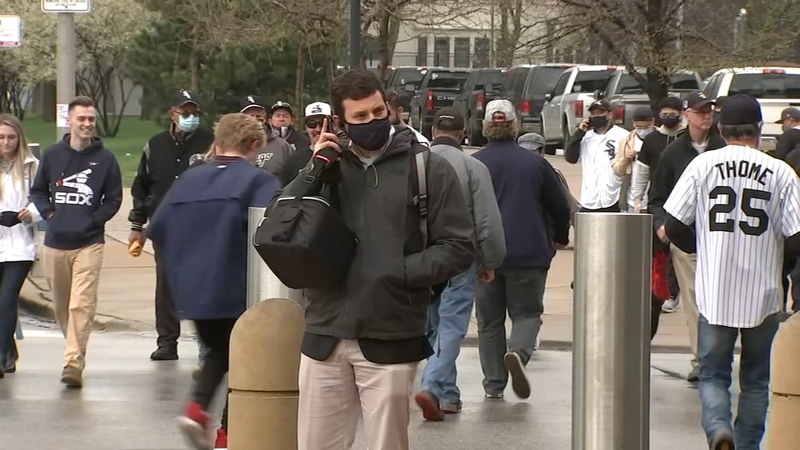 CHICAGO (WLS) -- The Chicago White Sox are hosting fans at Guaranteed Rate Field for the first time since 2019 Thursday for their home opener against the Kansas City Royals.

The game was initially set to start at 3:10 p.m. and fans were encouraged to get to their seats by 2:20 p.m. for all the pre-game ceremonies including an honor for local healthcare heroes. However, White Sox announced the game would be delayed due to weather.

The start of today’s game will be delayed due to weather in area. We are very optimistic to play today & will provide updated information as we receive it!

About 8,500 fans are expected and because of the pandemic, there are new and measures in place to ensure safety. That includes all fans ages two and over need to wear a face mask, even in the parking lots.

"We want to make sure everyone is safe and feels comfortable and has the best experience here, so everybody ages two and up are going to have to put on, to the gates, through the parking lot, wearing your mask," said Sheena Quinn, White Sox senior director of public relations.

"My grandfather used to bring me to the games, so now I want to carry the tradition and take my son," said Jimmy Belinski, White Sox fan.

"My family grew up big Sox fans, and I just kind of followed that lead I guess," said Michael Tallon, White Sox fan.

Chicago White Sox fans will be welcomed back to Guaranteed Rate Field for the first time since 2019.

Mayor Lori Lightfoot was among the fans who are expected to attend the Opening Day game. Her office limited seating capacity to 25% at baseball games. White Sox hope that will increase as the season continues.

"We're willing to be patient to be able to get fans in here, and we'll take what we can get," said Brooks Boyer, White Sox senior vice president, chief revenue and marketing officer.

Meanwhile, many White Sox fans predict a big season for their team and hope to build on last season's playoff appearance.

Guaranteed Rate Field will also be cashless to begin the season, and fans who do not have credit cards can buy White Sox gif cards at retail locations in their zone or at the Chicago Sports Depot. Some contactless features include pre-assigned parking paid through phones, cashless gate entries and concessions orders through phones.

"Our new feature that we have is our mobile ordering app, so fans can order their food and beverage from their seats, and they can pick it up from the location in their zone," said Rebecca Spaulding, Delaware North director of operations at Guaranteed Rate Field.

Other new safety measures are also put in place including the spacing between rows of seats, hand sanitizing stations, partitions at concession stands and sanitizing seating areas with electrostatic spray.

"It's been a long time. We can't wait for the sounds, the smells, just to be able to put this team, which are really excited about, in front of our fans, and for them to be a part of this process in this journey that we're on," Boyer said.

The reigning American League Most Valuable Player, Jose Abreu, will receive his award before the game. He became only the third Cuban player in history to win the award and the fourth player in White Sox history to earn the honor.

Brooks Boyer, Chicago White Sox senior vice and chief revenue and marketing officer, talks about what fans will experience at games this season.

It is a big day for the players and fans, but also for head groundskeeper Roger Bossard, "The Sodfather."

He is celebrating his 55th White Sox Opening Day at the ballpark.

Bossard joined the White Sox in 1967 as an assistant to his father, who had his own amazing record as head groundskeeper from 1940-to-1983. Bossard will be honored during pregame ceremonies Thursday.

Tony LaRussa, the White Sox Manager, said he is looking forward to be back as the manager.