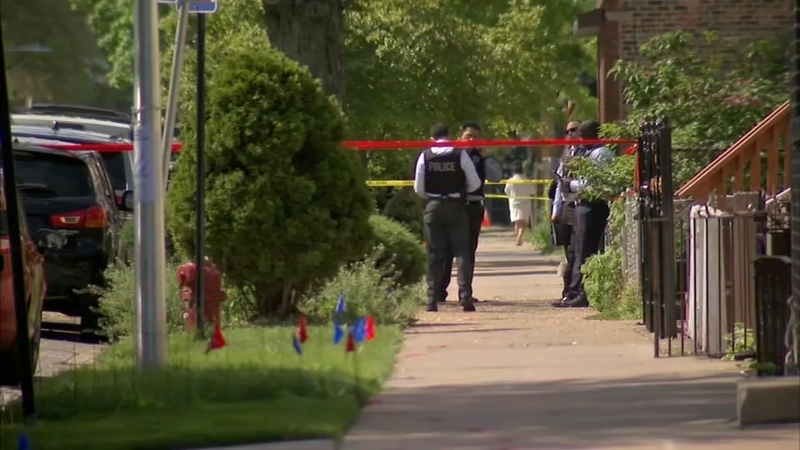 CHICAGO (WLS) -- There's a new push to end a rash of senseless shootings targeting children and teens in Chicago, including a 15-year-old girl who was shot Monday while walking her dog.

That teen is still recovering from her gunshot wounds at Comer Children's Hospital. Her mother said she underwent surgery on her arm Tuesday and is now able to get out of bed, even while still in pain. One bullet has been left in her lower back for now. Her mother said she just wants to get home to her dog.

A 13-year-old boy riding his bike in McKinley Park and the 15-year-old girl walking her dog in Washington Park are only two of the most recent children to be killed or injured by gun violence in the city of Chicago.

"Adding more police to the city has not worked. We have to reimagine what safety is," 20th Ward Ald. Jeanette Taylor said.

RELATED | Chicago shooting: Boy, 13, dies after being shot in McKinley Park over weekend

As of last week, 108 of the shooting victims in the city have been children. Sixteen of them have died.

With summer around the corner, community advocates worry about what is to come. On the West Side, Greater St. John Bible Church is among those that offer programming for those in the neighborhood. The pandemic, however, is limiting how many children they can take in.

RELATED | Girl, 14, shot while riding in car in Little Village

"We will continue our afterschool, which we will transition into summer camp," said Rev. Ira Acree, Greater St. John Bible Church. "That's only 25 children, because we need to social distance. City must find places to invest money, where there can be some viable options for these kids and be safe."

For 20th Ward Alderman Jeanette Taylor, the question is clear. The answer, however, remains elusive.

"I played double Dutch. I did jacks. I blew bubbles. I could sit on my porch in peace and that's not what we have now," Taylor said. "We have a city in chaos. So how does government work together with community to put plans together to help keep everyone protected?"
Report a correction or typo
Related topics:
chicagowashington parkmckinley parkchildren's healthchicago shootingchild deathchild injuredchicago violencechild killedchildren injurieschild shotchicago police department
Copyright © 2021 WLS-TV. All Rights Reserved.
CHICAGO SHOOTING
45 shot, 3 fatally, in weekend shootings across city
37 shot, 3 fatally, in weekend shootings across city
Girl, 16, among 2 shot in Lawndale
Gunshot victim crashes vehicle into Resurrection Hospital, witnesses say
TOP STORIES
Rockton chemical plant explosion causes major fire, smoke
Carjacking safety tips: What to do if you are in a fake accident
Family of security guard killed in Gary to remember him at White Sox game
Sea otter diagnosed, treated for lymphoma at Shedd
45 shot, 3 fatally, in weekend shootings across city
Driver beaten in West Dundee road rage incident dies, police say
Chicago raises Juneteenth Flag in Daley Plaza
Show More
8 injured when vehicle plows into crowd at mud race in Texas
Car drives through crowd of protesters in MN, killing woman
Mayor Lightfoot announces new summer cultural events
What to know about the delta variant first detected in India
IRS says it's working 'as fast as possible' after complaints about tax refund delays
More TOP STORIES News