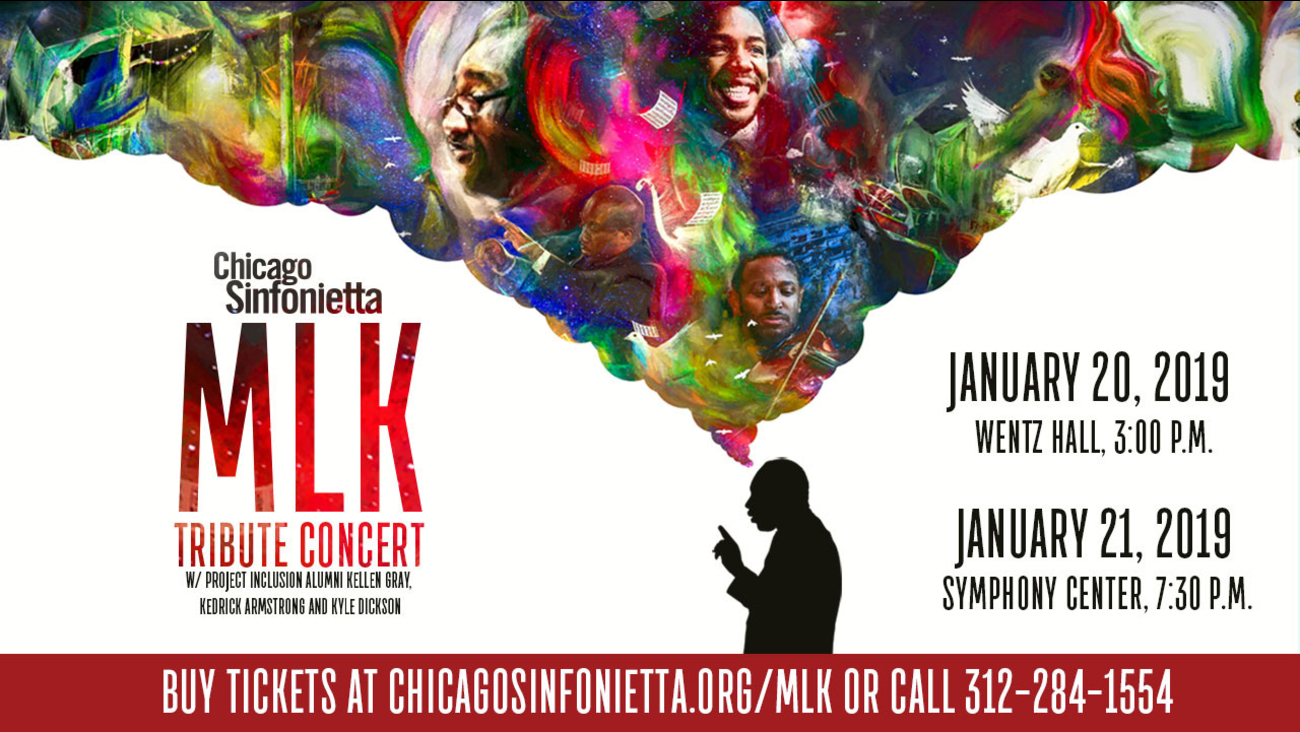 PRESS RELEASE (WLS) -- Like Dr. Martin Luther King Jr., the late Chicago Sinfonietta Maestro Paul Freeman had a dream when he founded what is now the nation's most diverse orchestra more than three decades ago: to provide a space for diversity, inclusion, and acceptance in the world of music.

Every piece programmed in this season's MLK Tribute Concert was specially selected by Kedrick Armstrong and Kellen Gray in collaboration with Music Director Mei-Ann Chen, for whom Armstrong and Gray will be stepping in. Chicago Sinfonietta will perform Ludwig Van Beethoven's Egmont Overture, Op.84, Adolphus Hailstork's Epitaph for a Man Who Dreamed, Trevor Weston's The People Could Fly, Samuel Coleridge-Taylor's Petite Suite de Concert, Op.77, plus Sir Michael Tippett's Five Negro Spirituals from 'A child of our time' and James Lee III's Come Unto Me. Special guests will include Project Inclusion Orchestral Fellow Kyle Dickson as the featured solo violinist for The People Could Fly and the Waubansie High School Mosaic Choir performing with the orchestra for Five Negro Spirituals from 'A child of our time' and Come Unto Me, with an additional performance of We Shall Overcome. A continued spoken word performance of Dr. King's most important speeches by Kenneth Woods will be interlaced with the musical components of the program.

"The concert program takes the audience on an emotional journey through music. The performance flows with spoken word recitations between pieces until intermission, which creates an enthralling and dynamic experience," said Gray. "In hand with the musicians, Chicago Sinfonietta does what no other orchestra does in broadening the spectrum of what is expected and encouraged in the concert hall."

Project Inclusion is Chicago Sinfonietta's groundbreaking fellowship program where talent and mentorship converge to develop diverse and emerging musicians, conductors, and administrators on and off-stage. What was created by Freeman to help eliminate institutional bias due to factors such as ethnicity, race, and socioeconomic status has since broadened to tackle matters of diversity and inclusion from every angle. Today, Project Inclusion offers multifaceted, professional development fellowships to four orchestral and ensemble musicians, up to four conductors, and 1-2 arts administrators each season. Chicago Sinfonietta is proud to share that 53 percent of Project Inclusion fellows have been African American, 30 percent Latin American, and 15 percent Asian American, including Arab American, as well as 50 percent female.

"I am still awestruck by the impact the Chicago Sinfonietta's Project Inclusion program has had on my career. Every person in the organization buys in to each fellow and supports them for who they are and builds them up with the knowledge and tools to be successful, creating endless possibilities for the individuals touched by the program," said Gray.

"Being part of Chicago Sinfonietta's Project Inclusion program during the 2016-2017 season with Kellen changed my life and gave me an opportunity to get my foot in the classical music industry's door," said Armstrong. "Being able to work together to lead this program has been humbling and an organic process, because the legacy of Dr. King is something both Kellen and I are directly impacted by. We both grew up in South Carolina and have similar backgrounds and experiences growing up in the Deep South, which gives us each a unique perspective and reason to celebrate how far we have come and how far we have to go as a society. We are looking for the audience to leave with an uplifting sense of legacy and to celebrate the ways that diverse musicians continue to fight for inclusion."

Woods, a spoken-word and voiceover artist, will make his return to the stage with the Chicago Sinfonietta. Performing in his second concert with the group, Woods' rendition of the I Have a Dream speech has been heard around the world both with and without musical accompaniment. According to Woods, some of the most impactful lines which will be heard by audience members include, "I have a dream that my four little children will one day live in a nation where they will not be judged by the color of their skin, but by the content of their character."

"What truly moves me about Dr. King's speeches is how the words are resonant and relative in the times in which we live," said Woods. "Every time I recite the words, I am overcome with a profound revelation of the man and the passion and compassion of his spirit. It is an honor to perform alongside the Chicago Sinfonietta and the musicians who work each and every day to help realize a more diverse, inclusive, and equal world for everyone."

The orchestra was founded by Maestro Paul Freeman to address disconnect between the utter lack of diversity in orchestras and the vibrant, nuanced, communities for which they play. For more than 30 years, Chicago Sinfonietta has made it their mission to represent the city of Chicago, reflecting that vibrancy on stage and in its programming, making classical music accessible for anyone. In everything they do, Chicago Sinfonietta is inspired by founder Paul Freeman (1936-2015). The orchestra's 31 years have been highlighted by six European tours, two Kennedy Center performances, three Millennium Park concerts attended by over 19,000 people and 16 recordings.