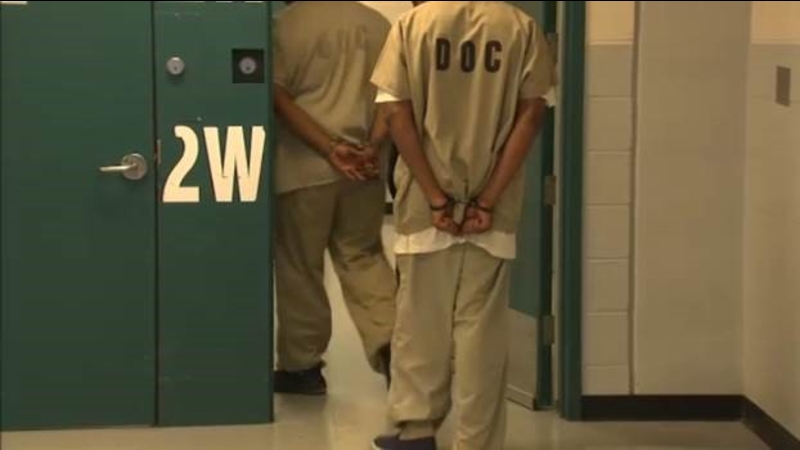 CHICAGO (WLS) -- Dressed in street clothes, inmates from the Cook County Jail were recently allowed to visit their children at Navy Pier as part of a pilot program aimed at breaking the cycle of kids with an incarcerated parent ending up in prison themselves.

On August 12, five inmates were transported to the Chicago Children's Museum to meet their families. Bobbi Davis brought her daughter, Geaniya, to visit her father, Gean Eriwin, who had spent the summer in the Cook County Jail on drug charges.

Geaniya is one of 37,000 children who had a parent at the Cook County Jail during the past six months.

"We spent a great deal of time with the folks at Navy Pier," said Cook County Sheriff Tom Dart. " It took us months to really get it to where we were comfortable with it, where there were no security issues."

Dart said after a year of planning, the Chicago Children's Museum was closed for the afternoon, something the museum does for a variety of other programming, according to a spokesperson. Fathers had taken parenting classes in the jail in the weeks leading up to the meeting.

"We wanted to make sure that not only the environment was safe and child friendly but the interaction between the incarcerated parent and the child was as well," said Dr. Nneka Jones Tapia, clinical psychologist and Leader in Residence at Chicago Beyond.

Chicago Beyond is an organization that has invested more than $30 million to help fight inequalities among young people in Chicago.

The president and CEO of the Chicago Children's Museum told the I-Team they are always looking at what the best outcome for the child is. and they are really interested in how childhood trauma affects the child's outcome moving forward.

Bobbi Davis said she did not like taking her daughter to the Cook County Jail because it is loud, cold, and she felt like they were treated like inmates. Still, she did it because it was important for Geaniya to see her dad.

Sheriff Dart agrees the jail is a bad environment for kids. He said there is a need to "come up with programs that are thoughtful and connect parents and their kids together so when they inevitably leave, which most of them do, to go back to the community, it isn't just all of a sudden this shock to the system."

It was Dr. Jones Tapia's idea to host the off-site visit at the Children's Museum.

"In thinking about how we can best minimize this continued cycle of people going in and out of correctional institutions, we know this is a part of that. This is part of real criminal justice reform," she said.

Jones Tapia is the former warden of the Cook County Jail. She said research shows preserving a child's relationship with a jailed parent lowers the rate of recidivism and is beneficial to the child. She said she herself is proof of that.

"This is very personal for me," Jones Tapia said. "My father was incarcerated multiple times throughout my childhood. Throughout that process I realized that I was very fortunate in that I was able to maintain a positive relationship with him."

When Davis was offered the opportunity to have her daughter visit her father away from the jail, she was thrilled. Davis said they had lunch, played video games, and took pictures, and said Geaniya was happy to hug her dad.

Sheriff Dart told the I-Team the five participants were in the jail on a variety of non-violent charges including identity theft, drug violations and aggravated robbery.

His team put together an extensive security plan for the outing. Chicago Police were asked for help but said no and declined an on camera interview.

A high-ranking CPD source did tell the I-Team they "should be fighting crime, not babysitting prisoners."

According to the sheriff's office, 19 sworn staff members did provide security for the event at a cost to the taxpayers of $8,000 in overtime. Dart admits it was a big task. He said there were no security breaches associated with the visit. Two of the five fathers have since been released, including Geaniya's dad.

Similar visits have taken place in New York City and Topeka, Kansas. Another one is planned in Chicago in November.