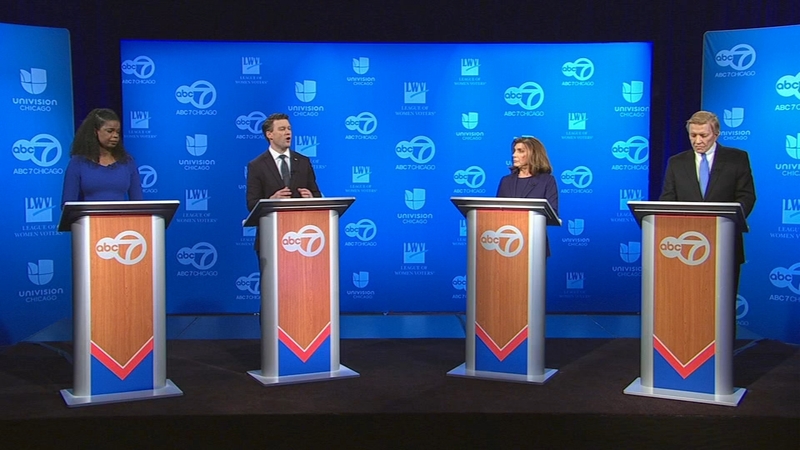 CHICAGO (WLS) -- Cook County State's Attorney Kim Foxx's challengers made their case to voters that it's time for change during a debate Friday night.

Foxx had a target on her back, named Jussie Smollett.

"What we saw in that case is somebody got a free pass because he was able to pay money and he was politically connected, and that's not right," said candidate Bill Conway.

"Jussie is one example, but it's a big example because when you screw up a big case the public doesn't trust you to handle any other case," said candidate Donna More.

But Conway also found himself under fire, as his campaign is mainly funded by $8 million from his father, who runs the Carlyle Group.

"The Carlyle Group is a firm that has heavily invested in military weaponry across the globe, including weaponry that's used by police departments here," Foxx said.

Foxx drew fire for raising the threshold for retail theft cases from $300 to $1,000 for them to be prosecuted as felonies.

"Illinois has one of the lowest felony thresholds for retail theft in the country," Foxx said. "Forty-seven states have a higher threshold."

"If we want to dismiss a whole segment of people that are committing crimes in our city and in our county, then go down the Springfield and make the changes there," said Bob Fioretti, candidate.

With Foxx flexing political muscle with the backing of the Democratic machine, her opponents face an uphill battle.

That's what's wrong with having the machine in Cook County. Because you don't get the best representation as a citizen and a voter, you just get the representation that the machine tells you, and it's time we break the stranglehold," Donna More said. "The primary is now just 18 days away. And with the state's attorney's race being one of the more high profile races, there is a lot at stake between now and the March 17th primary."

With just over two weeks left before the Illinois primary this race, which has already taken on a negative tone, could very well see more of it between now and March 17.

Democratic candidates for Cook County State's Attorney weigh in on Kim Foxx's handling of the Jussie Smollett case, and how to avoid conflicts of interest in office.