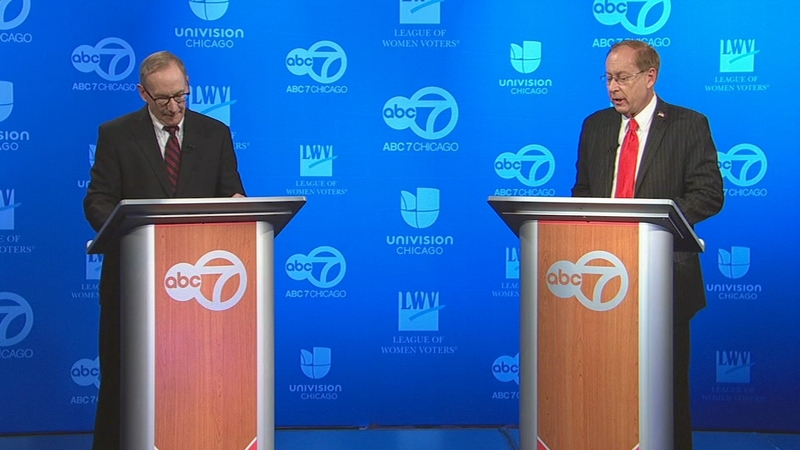 CHICAGO (WLS) -- The Republican candidates for Cook County State's Attorney faced off in a debate presented by ABC 7 Thursday night.

First, for her handling of the Jussie Smollett case.

"Kim Foxx handled this case very poorly and that is because she has no experience in the trial courts," said Pfannkuche. "Her incompetence and inexperience showed through."

"The way she handled it she broke the public trust," O'Brien said. "It is not something that you can then regain. The only way to restore it is to replace Kim Foxx."

They also attacked Foxx for not pursuing corruption prosecutions, and blamed her for a rise in retail thefts by raising the threshold for felony charges.

"That empowers the criminals out there to go ahead and commit additional retail thefts," Pfannkuche said.

"This is just lawlessness and it's silly and it should stop," said O'Brien.

The Republicans also traded barbs with one another.

"How do you account for the fact that I've got over 90 endorsements?" Pfannkuche asked. "You have not been endorsed by the Cook County Republican Party."

"I'm a prosecutor not a politician, I haven't spent five years running for an office," O'Brien answered.

"But the problem is he hasn't prosecuted a single case in 27 years and he's simply out of touch," Pfannkuche pressed.

"I've heard a lot about being in the office 31 years, and it takes a great deal of, I suppose diligence, to avoid being promoted to supervisor," O'Brien retorted.

Republican candidates considered how they might have handled the Jussie Smollett case and follow-up differently as Cook County State's Attorney during a debate Thursday.

Republican candidates for Cook County State's Attorney weigh in on bail reform measures, such as whether to eliminate cash bail for certain crimes and how to address nonviolent off

PART 4: Candidates are given opportunity to ask each other a question
EMBED More News Videos

Republican candidates Pat O'Brien and Christopher Pfannkuche are given the opportunity to ask each other questions.

The candidates weigh in on political corruption and former governor Rod Blagojevich.

The candidates discuss some of the State's Attorney's most sensitive and pressing issues: prosecuting gun crime, mental health cases, and when to prosecute a teenager as an adult.

The ABC7 Cook County State's Attorney's Republican debate wraps up with closing arguments from the candidates.