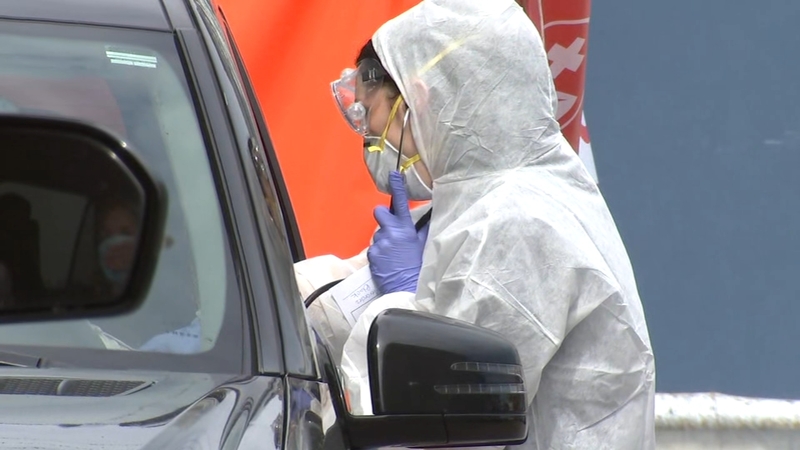 CHICAGO (WLS) -- For Illinois at the end of another shutdown week, there is good and bad news on the COVID-19 testing front, the ABC7 I-Team has learned.

By tens of thousands, Illinois is doing more COVID-19 tests than a week ago. That's the good news.

Bad news is that the state is not keeping up with the pace of many large states.

That is one conclusion of an I-Team analysis of state data from coast-to-coast.

As first responders continued to be tested at a National Guard operated drive-up facility on Chicago's Northwest Side, we examined the latest weekly stats from state health agency officials. The figures reveal that nearly 44,000 tests completed an increase of 27,000 from the previous week. Illinois dropped two spots to 30th in the U.S.-per capita-for completing COVID tests.

"We do not have enough tests," said Gov. JB Pritzker on Friday, responding to I-Team questions. "The federal government said they were going to provide millions of tests, and all the states relied upon that promise and it still hasn't happened."

That is a familiar chorus from the governor and even he noted that he has been harping on it for weeks.

"Now we're doing around 5,000 on average per day. And we're trying to get to 10,000 per day. Frankly I'd like to be at 100,000 per day," Pritzker said during his now-regular afternoon briefing. "If we can get to 10,000 per day-that helps us both tests the people that will come forward with symptoms on any given day and give us meaningful data."

Indiana jumped three places to 39th in the nation, after tripling the number of completed tests in just one week.
While Illinois' large population is a testing challenge, data reveals New York holds as the number one testing state and it has nearly twice Illinois' population.

Even as health care workers in New York say they're overwhelmed.

"Every day when I go to work I feel like a sheep going to slaughter. My colleagues and I are writing our last will and testament," said Dr. Laura Ucik who works at Montefiore Medical Center in the Bronx.

The most significant number from the state-to-state data may be at the bottom: in 50th place is California that has a backlog of almost 60,000 corona-virus swabs not yet analyzed-almost double the number that have been finished. On Friday California officials said the virus peak will be sometime in May.

"This is a battle zone," said Los Angeles doctor Sam Torbati from Cedars Sinai Hospital. "I mean it's a medical environment-it's loving, it's caring. But we have a common enemy."

And finally on Friday there was this from southwest suburban Will County: officials there had been reporting nine deaths from coronavirus. On Friday records revealed they scaled it back to eight. The I-Team was told by Will County coroners that a woman in her 60's who's death had been attributed to corona-virus is now said to have died of something else.