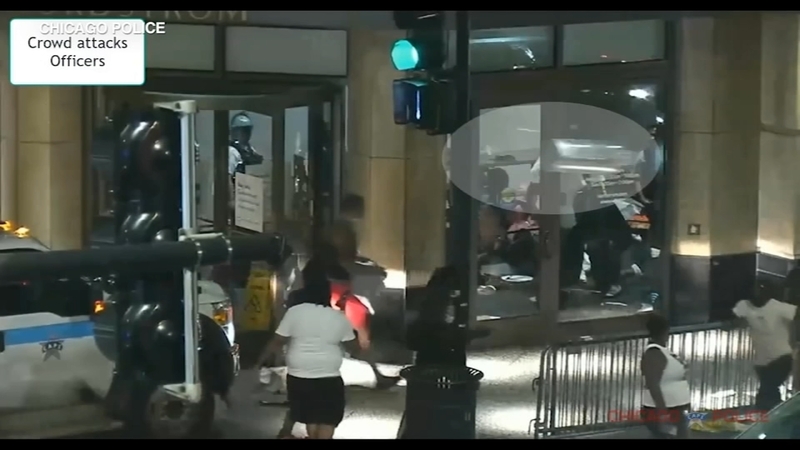 CHICAGO (WLS) -- Chicago police are asking for the public's help in identifying those who took part in this week's looting.

Chicago Police Chief of Detectives Brendan Deenihan spoke Wednesday at CPD headquarters to give an update on the investigation.

"At this point, it's 'hey, do the right thing, if you know who did this, look at what the hell happened down there.' Let's get these people identified and move on. Get them arrested," he said.

The department has launched a new website with video and photos of some suspects for the public to see. Detectives said the site and the new looting task force announced Tuesday are only as effective as the community that supports it.

Visit Home.ChicagoPolice.org to view the images. Members of the public can call Chicago police or submit tips online if they recognize the individuals.

"This was just an attack on our city, and we really need everyone's help to identify these officers," said Deenihan.

One video was shown during Deenihan's remarks Wednesday, in which a suspected looter broadcast himself on a social media platform.

Police are also asking for more video and photo submissions from late Sunday, into early Monday.

In one clip, three suspected looters are seen trying to break into an ATM near 800 North State Street. New surveillance video from the Sunglass Hut in the 900-block of North Michigan Avenue shows two males, one suspected of breaking in and both seen taking items from the store.

"Camera footage is only valuable when our officers and detectives can identify the individuals caught on camera committing a crime. We need everyone's help to do this," Deenihan said.

The calls for community help came after Mayor Lori Lightfoot did an interview with Time Magazine in which she called for unity in the city, saying in part, "...we won't survive this moment. We will not thrive. We will not move beyond, get stronger and better, if we don't unite."

While police investigate, security guards protect retail stores -- dozens boarded up. And there's a growing call for elected leaders to do more.

"This is a dire, severe emergency and we need action," Chicago Loop Alliance President and CEO Michael Edwards said.

He said looters targeted at least 25 businesses in the Loop.

"I think the psychological effect of that has everybody on edge. When is this going to happen again? Are folks simply waiting for us to restock the stores, and are they going to come down in three months and do it again? So that's giving everybody pause," Edwards said.

Shapiro's father started the business 62 years ago. In seven months, criminals have busted in four times, including looters on Monday.

He, too, is upset with city leaders.

"I'm losing faith in the, you know, the people we've elected to run this city and to keep us safe and to protect us," Shapiro said.

And that's how people who live in the city feel. The president of Sudler Property Management said to Mayor Lori Lightfoot, "We need support. We need backing. We need you to fulfill your duty of ensuring the well-being of all Chicago residents."

Many of those already arrested in the latest looting attack on Chicago are now going in front of Cook County judges.

Chicago police arrested more than 100 people early Monday morning during this latest looting across the city.

Many faced felony charges Wednesday after authorities say the suspects were arrested inside stores or caught carrying clothes, shoes or jewelry, climbing out of shattered storefront windows.

Even though police may have been outnumbered by looters as theft teams worked the Magnificent Mile and Oak Street, officers managed to take dozens into custody.

Neither police nor prosecutors have released the names of those charged, but the ABC 7 I-Team has monitored bond court proceedings and examined Cook County records to get an idea of whom was arrested and what's happening to the accused looters.

Many were first-time offenders.

Among the alleged looters at the Gucci store on Michigan Avenue, was a 21-year-old Simeon High School graduate said to have $41,000 in Gucci items in his car. His bond was set at $10,000.

Some activists and Black Lives Matter supporters are concerned the looting in Chicago in apparent response to a police-involved shooting will set back their quest for long-term, sy

Another alleged Gucci looter allegedly carried out $10,000 in merchandise and was arrested; her bond is $1,000.

At the Macy's store attached to Water Tower Place, a 29-year-old woman was caught inside with an armful of shirts that police say she dropped. Her bond is $2,500.

During virtual bond hearings on Tuesday, one Cook County judge said monetary bonds were important because of the disruption caused by looting.

Many, if not all, of those charged with looting will likely be freed on bond.

In May, looting spanning a full weekend resulted in more than 1,000 arrests, most were charged with disorderly conduct.

A small percentage was charged with serious felonies, and that has become a flashpoint issue between Chicago City Hall and the state's attorney's office, leading to questions about prosecutorial choices; the conversation is especially supercharged in a county election year.

Foxx said she did not know if anyone arrested this week was also arrested and charged in May and June for looting.

She said that many of those arrested this week would likely be able to quickly bail out of jail.

Raw footage of this week's looting is helping her office get a better idea of who the looters are; she said there appeared to be widespread coordination among them.

"I don't know that there's ever justification for what we saw; (it was) wanton destruction of property," she said of the violence.

But despite accusations of her office not be tough enough on suspected looters, Foxx said Wednesday she's not worried in an election year.