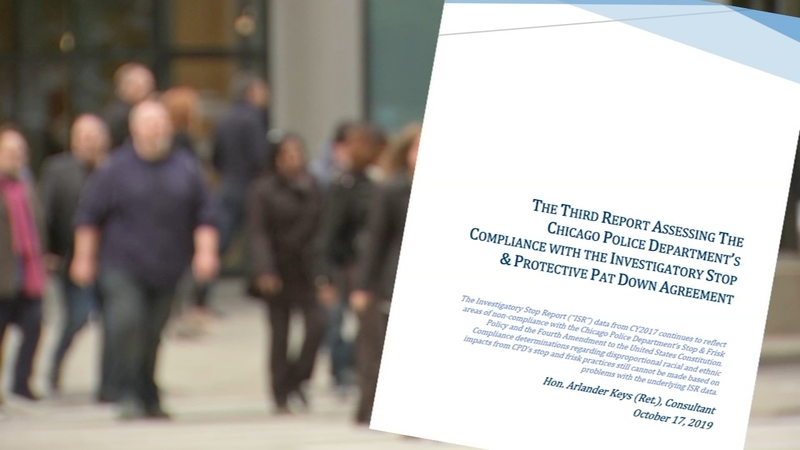 "Stop and frisk" is the term used when police officers stop people on the street and pat them down.

Roughly 70% of all pedestrian stops are conducted on African Americans in Chicago, according to a report from former U.S. Magistrate Judge Arlander Keys. African Americans make up only 33% of the city's population, the report said.

Chicago officers are also allowed to rewrite reports about pedestrian stops up to seven times. They're allowed to do so when the initial report failed to contain a constitutional reason for stopping and searching someone on Chicago's streets, according to the report.

The findings come after the American Civil Liberties Union looked into racial disparities in policing.

"The city has committed to make substantial and important changes to how it reports and analyzes pedestrian stops," said Karen Sheley, Director of the Police Practices Project for the ACLU of Illinois. "Critically, the city has also agreed to address the racial disparities in these stops, rather than fight about whether the disparities exist."

As Chicago's police practices are analyzed, there is a nationwide review of police traffic stops.

"We are seeing elevated stop rates for black drivers," said Amy Shoemaker, the Stanford Open Policing Project, which compiles and analyzes police data across the country.

In the thousands of traffic stops conducted in the U.S. daily, the project also found disparities.

"We performed a test called the 'veil of darkness' test that did find evidence of racial profiling specific when it comes to black drivers versus white," Shoemaker said.

As for Chicago pedestrian stops, the city's Police Department issued a statement emphasizing the data reviewed by the judge was from 2017. The department noted that improvements have been made since then, but acknowledged that more needs to be done.

"CPD has overhauled its training program in recent years to emphasize good judgment based on articulable facts," the department said. "While this data from 2017 indicates that more improvements can be made, Chicago police officers are trained to only stop citizens based on reasonable suspicion that a crime has been or is about to be committed and in response to calls for service."
Report a correction or typo
Related topics:
chicagodiscriminationaclustop and friskchicago police department
Copyright © 2021 WLS-TV. All Rights Reserved.
More Videos
From CNN Newsource affiliates
TOP STORIES