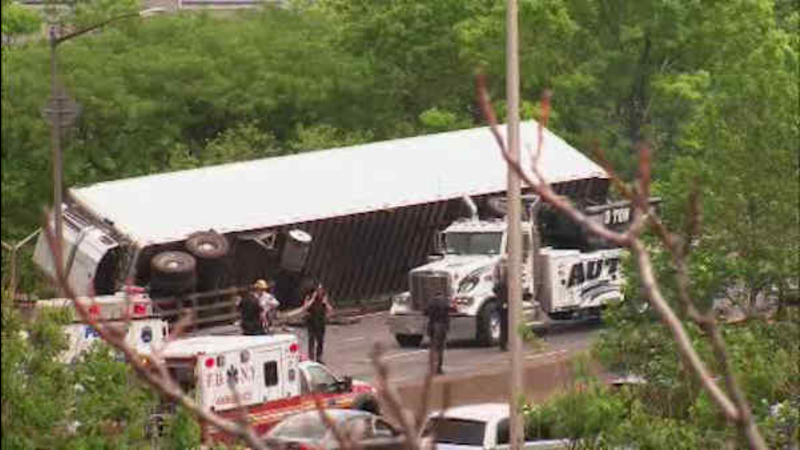 NEW YORK -- All lanes have reopened after an accident on the Cross Bronx Expressway left a tractor-trailer precariously hanging over the Sheridan Parkway in New York City Monday.

The crash happened in the westbound lanes just after noon and reportedly involved multiple cars.

The driver -- 55-year-old Pablo Lopez -- was transported to St. Barnabas Hospital with serious but non life-threatening injuries. He received seven metal staples in his head, but officials say he is very, very lucky.

Lopez said he was on his way back to New Jersey from Connecticut after dropping off a truckload of tomatoes when a black car cut in front of him and struck the front of his cab. He lost control, and he said he did everything in his power to prevent the accident from being much, much worse.

Lucy Yang has the interview.

Police, the FDNY and road crews worked for hours to secure the overturned tractor-trailer. The trailer was uprighted around 3:30 p.m., but the cab remained dangling over the roadway. A tow truck pulled it back up to the Cross Bronx by around 4:30, but debris littered the ground on the Sheridan.

The crash created a traffic nightmare, with all lanes closed hours after the accident. Eastbound lanes reopened after about five hours, while westbound lanes remained shut down until just before 6 p.m.