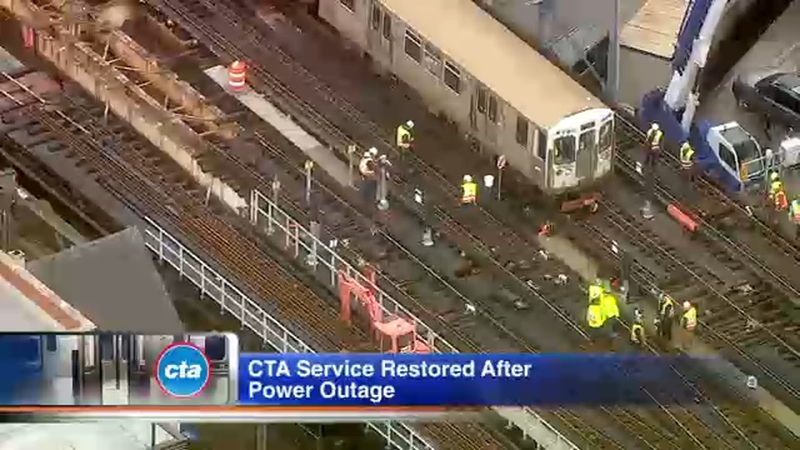 Chicago police said a train signal fell onto the CTA tracks in the 900-block of West Belmont Avenue, knocking out power to the track, but the CTA said it's still investigating the incident.

Service on the Red, Brown and Purple Express lines was temporarily suspended for hours, with shuttle buses put into operation. Service on the Brown Line resumed around 8:45 a.m. and on the Red Line at about 11:40 a.m.

Getting evacuated from his Purple line train and walking along the elevated tracks was clearly not how Devin Jarell, or any of his fellow passengers, expected their morning commute to go.

CTA crews work to resore service on the North Side after a signal fell on the tracks near Belmont.

The delays created a chaotic morning for commuters, making a lot of them late for work.

"I'm kind of still in shock right now trying to figure out how I'm going to get to work," said commuter Jasmine Jones.

The power outage shut down all CTA tracks near Belmont, forcing evacuations on all tracks and leaving many scrambling for a ride.

Dozens of emergency personnel from both the fire department and CTA were called in to respond, to deal with both the evacuations and the repairs, which went on for hours.

"We were stopped for about an hour and a half," Jarell said. "The conductor came on and eventually said we'd all be exiting the train and another fire department fireman came through and escorted us all to the end of the train and we all got off."

"It's stressful," Jones said. "I like don't really know what to do because there's no buses that go up north where I need to go, so I kind of have to wait until Lyft lowers their prices a little bit ... it's a surge right now."

"Might be a smidge late for work but almost the weekend so I guess it's not too bad, but yeah, this is very unexpected," commuter Jake Goodman said.

Chopper 7HD flew above the scene as crews worked to try and restore service.

There is ongoing reconstruction work at the site where this happened and police initially said that it was a train signal that fell onto the CTA tracks that caused the problem. Transit officials, however, said they are still investigating.

A CTA spokesperson said the evening commute is not being impacted