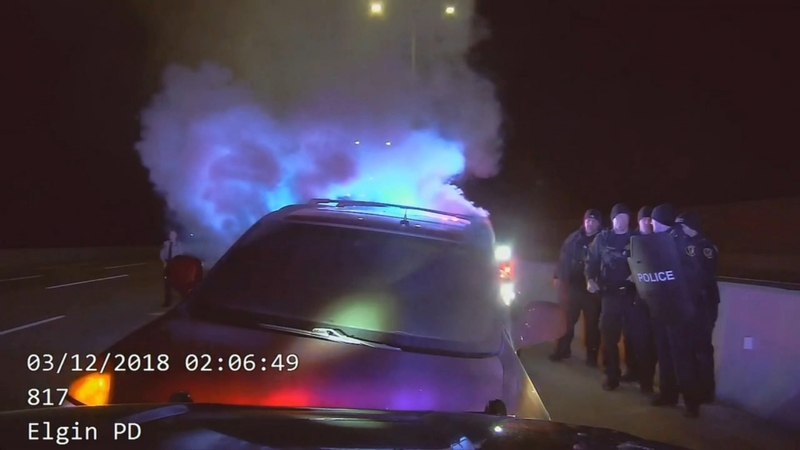 ELGIN, Ill. (WLS) -- Nearly 18 months after a violent, fiery and fatal confrontation on the Jane Addams Tollway, an Elgin police lieutenant will be reinstated to full duty after being cleared of violating department deadly force rules.

Lt. Christian Jensen had been on paid leave since March 12 of last year when he shot and killed Decynthia Clements, 34, during a highway standoff that was soon after released on video and enraged some members of the community.

"I have been diligent to listen to all voices for the purpose of finding a remedy that could move the community and the police department forward in healing," Elgin Police Chief Ana Lalley said in a newly released report.

Chief Lalley made the announcement of her decision to reinstate Lt. Jensen on a video that was posted Wednesday night.

Jensen has been on paid leave during the course of investigations conducted by state police, a private outside contractor and the Cook County state's attorney.

He will now be reinstated to full duty and face no disciplinary action. However, the chief said that he will be assigned "in an administrative capacity with limited public interaction at this time."

Clements was in her car on the Jane Addams Tollway during the standoff in which numerous Elgin officers tried to talk her down.

Video obtained last March by the ABC7 I-Team showed a pair of police squad cars sandwiching her vehicle and immobilizing it. Despite nowhere to run and being surrounded by armed police, she refused to surrender.

Chief Lalley's final report on the incident describes how Lt. Jensen tried to rescue Clements after she lit two pieces of paper on fire and threw them into the back seat. Clements then got out of the vehicle with a knife in each hand. According to police reports and various police videos, she was simultaneously shot by Jensen while another officer used a Taser on her.

As the I-Team has reported, an autopsy revealed that Clements had cocaine in her system and apparently self-inflicted cuts on her neck. Police had said that they believed she was stabbing herself during the standoff.

Jensen was found to have violated several department procedural policies in dealing with suspects, none of which rose to the level of requiring discipline, according to police department officials.