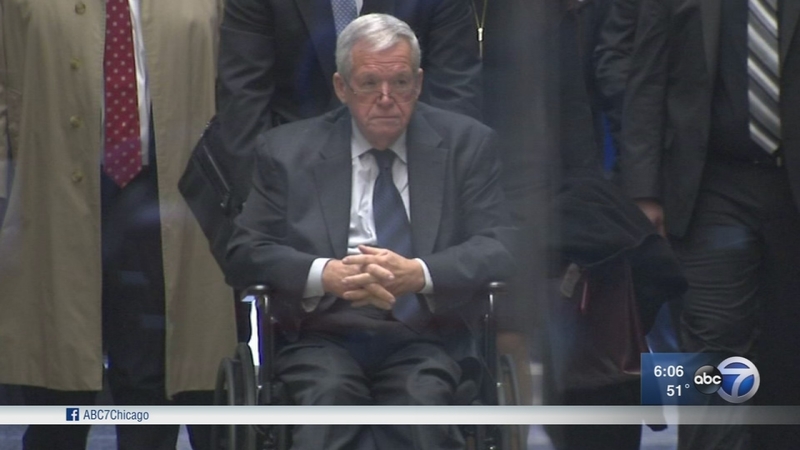 Kendall County Circuit Court Judge Robert Pilmer on Monday ruled that the allegation was too old, and fell outside the statute of limitations. Pilmer did not rule on the truth of the sex allegation, or charges by the attorneys for the accuser that he was "intimidated into silence" by Hastert's power.

The victory for Hastert comes after multiple legal losses and setbacks, including a 14-month stay in federal prison for covering up hush money payments to one sex abuse victim. Hastert was formerly third in line to the U.S. presidency.

In the Kendall County lawsuit dismissed on Monday, Hastert was accused of molesting a young boy while in a Yorkville school bathroom when the accuser was in fourth grade. Hastert denied the accusation.

"The conduct that forms the basis of the complaint at issue took place in 1973 or 74," said Hastert's attorney, John Ellis, during a court hearing.

It would be decades before the man who was elected to Congress and became speaker of the U.S. House of Representatives would be unmasked as a child molester.

The former speaker-now on court supervised release-wasn't in court Monday as his attorney argued a motion today to dismiss one of the lawsuits - a complaint filed by an unnamed accuser now in his 50's.

"If you look at the complaint, all of those allegations, all they prove is that for that 30-year period of time the plaintiff was aware of his complaint but just decided not to file," said Ellis.

Attorney Kristi Browne said Hastert's unnamed accuser wanted to file a lawsuit decades ago but was persuaded not to by officials known to have been aligned with Hastert.

"Obviously in this case when you're dealing with somebody who is very powerful-that really didn't come to light for our client until somebody else-until the federal government in fact indicted him and these facts became evident," Browne said.

The accuser in Monday's case is still considering a lawsuit against school district 115 in the abuse case. Hastert is still facing a breach of contract case.

That lawsuit was filed by a man who claims that Hastert didn't pay the full $3.5 million in hush money. Their deal was allegedly interrupted by the FBI investigation that landed Hastert behind bars.