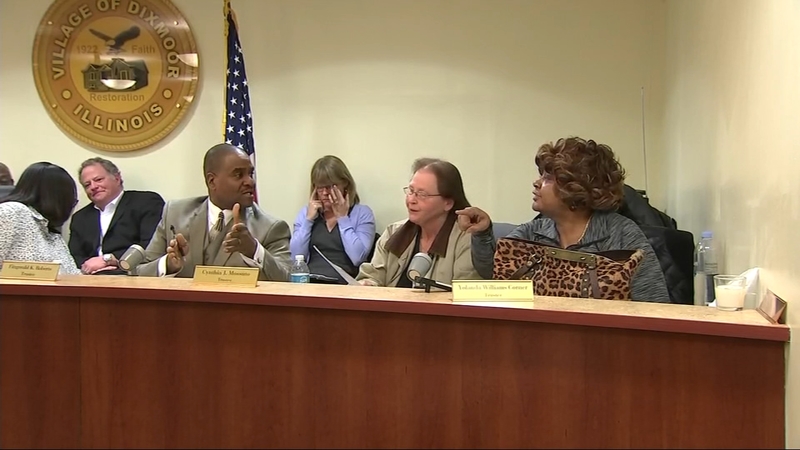 DIXMOOR, Ill. (WLS) -- The Dixmoor village trustees held a heated meeting Thursday night to address charges against a police officer and the overpayment of their mayor.

Every seat was taken at Dixmoor Village Hall for the meeting, and trustees shouted at each other.

The meeting came a week after Dixmoor Police Commander Ronald Burge, Jr., son of police Chief Ronald Burge, Sr., was charged with aggravated battery and official misconduct in connection with the arrest of a 66-year-old woman.

The board voted to suspend Burge, Jr. with pay pending a disciplinary hearing.

"There's still an ongoing investigation into this matter. I cannot speak of it," said Chief Burge.

Also under fire is Mayor Yvonne Davis, who trustees say was overpaid nearly $64,000 over two years and said nothing.

Last week the mayor acknowledged a "payroll error" and promised to reimburse the village by foregoing pay for the rest of her term.

Adding to the turmoil is a lawsuit filed this week by two trustees, Fitzgerald Roberts and Toni Mitchell. They are suing the village and Chief Burge, alleging a pattern of harassment by police after they called for an investigation into village finances.