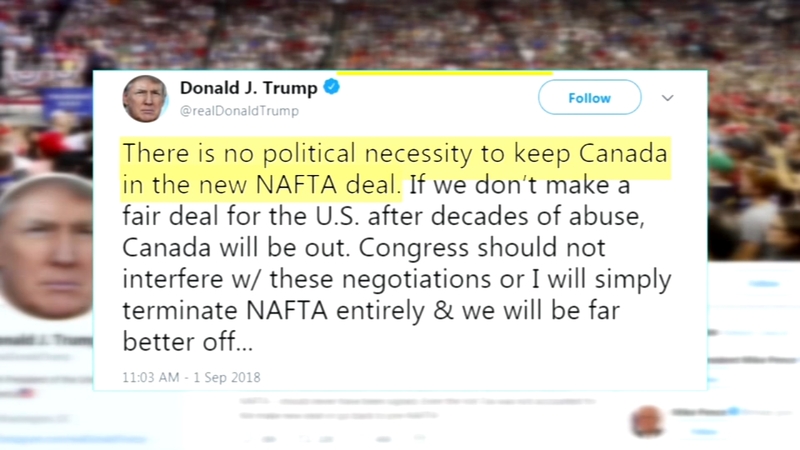 WASHINGTON, D.C. -- As many in Washington gathered to pay their respects to Senator John McCain, President Donald Trump hit the golf course after a busy morning on Twitter going after a few regular targets.

In a tweet, Trump called NAFTA one of the worst trade deals ever made, saying "there is no political necessity to keep Canada in the new NAFTA deal."

There is no political necessity to keep Canada in the new NAFTA deal. If we don’t make a fair deal for the U.S. after decades of abuse, Canada will be out. Congress should not interfere w/ these negotiations or I will simply terminate NAFTA entirely & we will be far better off...

....Remember, NAFTA was one of the WORST Trade Deals ever made. The U.S. lost thousands of businesses and millions of jobs. We were far better off before NAFTA - should never have been signed. Even the Vat Tax was not accounted for. We make new deal or go back to pre-NAFTA!

Trump also called the media corrupt, brought up the Clinton campaign and mentioned what he calls the "fake dossier."

“No information was ever given by the Trump Team to Russia, yet the Hillary Clinton campaign paid for information from Kremlin sources and just washed it through an intermediary, Christopher Steele.” Jesse Waters

The president also quoted others who said the Department of Justice and the FBI are out of touch.

A few miles from where Trump was tweeting, the late Senator John McCain was honored by three former presidents and high-powered politicians from both sides of the aisle. Trump was reportedly not invited.

While no one explicitly mentioned Trump at McCain's funeral, Meghan McCain made it clear that the president was not far from everyone's minds.

"The America of John McCain has no need to be great again, because it was already great," Meghan McCain said in a eulogy for her father.