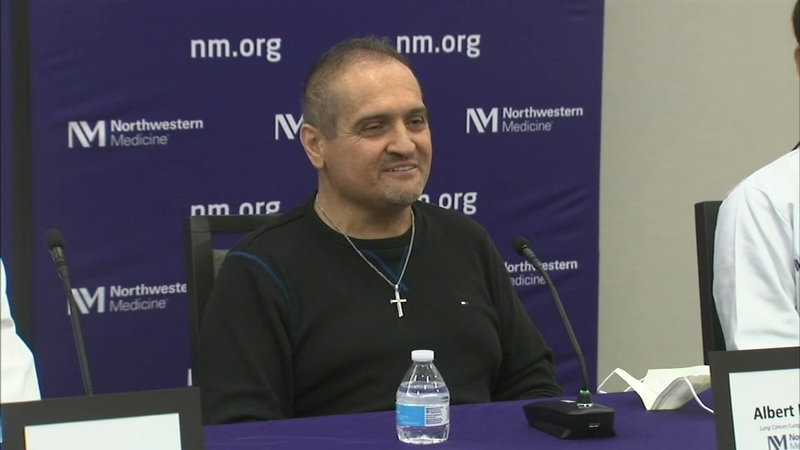 CHICAGO (WLS) -- A Chicago man diagnosed with lung cancer and given no chance of survival is alive and well after receiving a double-lung transplant at Northwestern Medicine.

Walking out of Northwestern Memorial Hospital is something Khoury was once told he would never do. Just a few months ago, the 54-year-old stage 4 lung cancer patient was days away from death.

"They told me I had a couple weeks," Khoury said, "they offered me hospice."

Medical treatments had been exhausted for Khoury, a non-smoker who developed lung cancer at the beginning of the pandemic.

"Literally, he was drowning with cancer cells in his lungs," said Dr. Young Chae, an oncologist at Northwestern Medicine.

"We had to be extremely meticulous not let those trillions of cancer cells floating in his old lungs to spill into the bloodstream or into the chest cavity," said Dr. Ankit Bharat, chief of thoracic surgery at Northwestern Medicine.

The extremely rare surgery, which has been performed only a handful of times elsewhere, was a success.

"I woke up again and they told me, 'you got new lungs and you are cancer free,'" Khoury said. "I was shaking my head and said, 'no way.'"

"It seems surreal to see his follow up scans that are clean," Chae said.

Doctors said Khoury was a good transplant candidate because his cancer was confined to his lungs. If the cancer had spread to other organs or the lymph nodes, a transplant would not have been an option.

Because of Khoury's successful outcome, Northwestern is developing new protocols for lung cancer patients. Doctors are evaluating other patients for transplants.

Khoury advises other terminal lung cancer patients to stay strong and not give up. Friday will be six months since his transplant surgery and there isn't a day that goes by where Khoury isn't grateful for his 2nd chance.