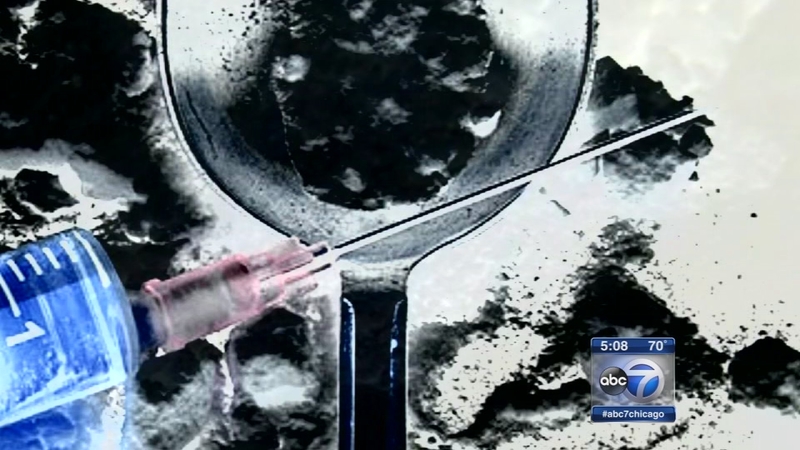 CHICAGO (WLS) -- Efforts are underway to prevent a heroin epidemic in schools as Wednesday is Heroin Abuse Awareness Day in Illinois.

Since 2012 the drug has taken a life every three days in Chicago's suburbs. It's an epidemic that continues to grow.

"The high was so intense. I couldn't stop. Addiction for me, it was my wife. It was my life," a former addict, who declined to be identified, said.

Now 26-years-old, this former addict has been clean since 2010. But the stigma attached to heroin use is such that he won't show his face. It is the biggest obstacle to those involved in the battle against heroin.

Implemented 18 months ago, the software is designed to educate students about the drug's dangers. But despite its potential benefits, and DuPage County's backing, they're having trouble getting schools to participate.

"Talk to your school board members. Talk to your principals and superintendents and just say, 'Look. An acknowledgement that it's a problem doesn't promote the problem,'" said Dan Cronin, DuPage County Board chair.

One school acknowledging the problem is Stevenson High School in Lincolnshire, Ill.

"We pull the cap off and there's actually a voice prompt so it will tell us to place it against the victim's thigh," said Officer Tom Branick, Lincolnshire Police Department.

No student has ever overdosed on campus here but starting next week, nurses at Stevenson will be trained to use these EpiPen-like, single dose heroin antidote devices.

"It was such a no brainer. We decided, why not do this? Why not have something in here to save a life potentially," said Jim Conrey, Stevenson High School.

With this move, Stevenson becomes one of the first Chicago-area schools to bring these antidote devices onto a school campus.