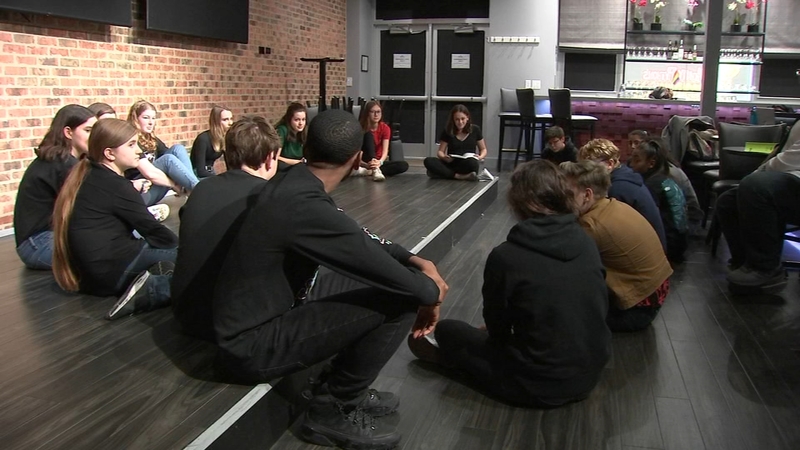 CHICAGO (WLS) -- Hours before a performance of Spamalot takes center stage at the Mercury Theater on Chicago's North Side, students from Whitney Young High School used the space to rehearse their upcoming play, called "Trap."

Run-throughs of the production were put on hold due to the teachers strike, and the students are thankful to have the chance to be back on stage.

"The fact that we have missed a week and counting of school has been a major impediment on it, because we have less time to dig deep into each person's roles," said Tova Kaplan, Whitney Young student.

Mercury Theater staff said they will host the students as long as needed because, as the saying goes, the show must go on.

"We're always happy to invite our neighbors and anyone local to come in, we like to think of the Mercury as a home to the community," said Morgan Mercieca, Mercury Theater.

The students said being a professional theater is exciting, especially since they were scrambling for a place to rehearse.

"It's cold outside, so we can't go to a park," said student Aneas Potts. "We can't fit that many people in someone's house. It was difficult."

Despite the uncertainty of how long the strike will last, the students said they support their teachers. And in the meantime they will focus on fine-tuning their performances.

"It's gonna save us so much time when we come back," said Nick Johnson, student. "We already have started to meld everything together."

While the cast is grateful for the chance to rehearse, the strike is affecting the rest of the production as well. They haven't been fitted for their costumes, and the set crew has not been able to build props. They are just hoping it all comes together before the curtain goes up on opening night in three weeks.
Report a correction or typo
Related topics:
educationchicagolakeviewchicago public schoolsstriketheaterstudents
Copyright © 2021 WLS-TV. All Rights Reserved.
TOP STORIES
Rockton chemical plant explosion causes major fire, smoke
Carjacking safety tips: What to do if you are in a fake accident
Teen girl kidnapped off street in Peru, IL
Biden reaffirms US 'sacred' commitment to NATO
Our America: Black Freedom | Watch full episode
Disneyland dropping mask policy for fully vaccinated guests starting June 15
Girl Scouts have millions of unsold cookies
Show More
4 mass shootings in 6 hours leave 38 wounded, 6 dead
45 shot, 3 fatally, in weekend shootings across city
Jose Torres named interim Chicago Public Schools CEO
Hot Cheeto tacos served at Crown Point restaurant
DePaul University president stepping down summer 2022
More TOP STORIES News