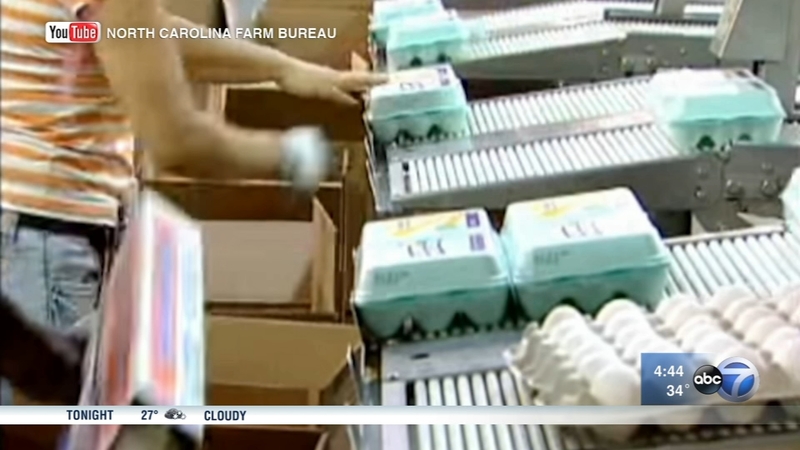 Check your eggs, as more than 200 million are being recalled because of potential contamination of salmonella.

According to the FDA, 22 illnesses have been reported in connection with the eggs to date.

The eggs have been sold in various stores in nine states, including Walmart and Food Lion.

According to the FDA, the eggs were distributed from the farm in Hyde County, North Carolina, and reached consumers through retail stores and restaurants via direct delivery.

"They have over 2 million eggs produced at the farm each day," said Dr. Elizabeth Grasso-Kelley, Illinois Institute of Technology. "So if you think about, if they are having an issue and they recall it later, at some point in time there's going to be more eggs that are affected versus a smaller producer."

In addition to the recall, the affected egg farm has paused its distribution.

The eggs that are part of the recall can be identified by the plant number, P-1065, with the Julian date range of 011 through 102 printed on either the side portion or the principal side of the carton or package. The FDA, urges you to stop using the recalled eggs right away and return them to the store you bought them from for a full refund.

"Consumers with these eggs shouldn't eat them," FDA Commissioner Scott Gottlieb said on Twitter. "Throw them away or return them to place of purchase for credit or refund."

Illinois is not among the states where the tainted eggs were sold, but recall or not food safety experts say people should always use care while consuming and handling eggs.

"It may seem a little silly but you can wash your eggs before you break them, because if there is salmonella it could be on the egg shell. You could also buy pasteurized eggs. All liquid eggs are pasteurized," said Dierdre Schlunegger, CEO of Chicago-based food nonprofit Stop Foodborne Illness.

Other practices for safe food handling at home include keeping hot foods hot and cold foods cold, and washing hands, utensils and surfaces in hot soapy water before and after handling foods.

"I'm always, when I'm using eggs, using them in a recipe, after I put them in the pan or the bowl or whatever it is, I go and wash my hands right away," Schlunegger said.

According to the FDA, the recalled eggs may be contaminated with salmonella braenderup, an organism that can cause serious and sometimes fatal infections in young children, frail or elderly people, and others with weakened immune systems. Healthy individuals can experience fever, diarrhea, nausea, vomiting and abdominal pain.

According to the CDC, salmonella infections cause 1.2 million illnesses each year, including 450 deaths, mostly among the elderly and those with compromised immune systems. But even if you suspect you've eaten a salmonella-infected egg, don't panic. Most people will only suffer gastro-intestinal issues.

"For the most part you're going to have a lot of unhappy days, or a few unhappy days. It doesn't mean it's going to be life-threatening," said Dr. Grasso-Kelley.

The recall came about after the illnesses were reported in states along the East Coast, and the FDA inspected the farm in eastern North Carolina's Hyde County that produces about 2 million eggs per day. Gottlieb said the agency's testing connected the recalled eggs to the people who got sick.

And it's not just eggs. The Centers for Disease Control and Prevention issued another warning Monday in response to an E. coli outbreak related to romaine lettuce. Consumers nationwide are now being told to throw out any and all store-bought romaine lettuce, including salads and salad mixes.

The egg recall notice lists varieties of a Food Lion store brand as well as some cartons available as the Great Value brand, which is sold at Walmart. The recall also lists eggs that were distributed to the Waffle House restaurant chain.

Food Lion has pulled the recalled eggs from shelves of the approximately 400 stores where they were available, said spokeswoman Emma Inman.

"The eggs that are in the stores today are safe," she said by phone. She said she didn't have information on whether Food Lion customers were among those who got sick.