Electric scooters in Chicago? They may be coming back soon 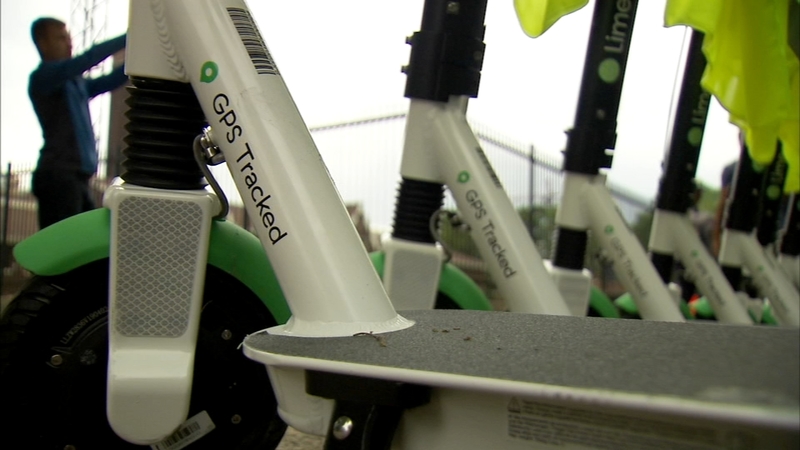 Electric scooters in Chicago? They may be coming back soon

CHICAGO (WLS) -- Electric scooters could be coming back to Chicago.

Safety concerns are being addressed after two pilot programs, and one alderman wants them to come to Chicago permanently. New technology could help.

A simple beep from a scooter could keep more scooters off sidewalks, an important criteria for city aldermen.

"Based on the use of our technology, which allows the operator to detect when a rider goes from the street onto the sidewalk, within a second of that behavior occurring we would enable the scooter to either be slowed down or stopped," explained Alex Nesic of Drover AI.

The company is working with the scooter company Spin, just one of the companies vying to be part of a permanent scooter program in Chicago. It is using scooter cams to detect when a rider is on a sidewalk. The scooter tech can tell when it's on a sidewalk and then it starts to beep. The city can decide whether to slow the scooter down or stop it.

Spin and other scooter companies have expanded beyond just using GPS technology to keep scooters off sidewalks.

During the second pilot in 2020, GPS was used along with city rules to lock scooters in hopes of reducing complaints. During the first pilot, the I-Team found riders on sidewalks and scooters discarded across the city.

"Part of the reason why complaints drops from the from the first pilot to the second pilot by 75% was incorporation of the lock to technology, which required users to lock their scooter after the end of their trip on a bicycle rack or a light pole, stuff like that, you know, we took the data and the feedback that the community gave us at the end of the second pilot. And sidewalk riding was a huge issue that they wanted to address. And so we expanded on our investment," said Frank Speek of Spin Scooters.

Lime says it's using "patent-pending vibration analysis" to determine if someone is on a sidewalk.

Scooter company Bird says it's using a global location chip and sensor based technology which can provide pinpoint tracking on sidewalks.

He introduced an ordinance to bring scooters to the city permanently and to expand the program not only to neighborhoods but to the heart of downtown.

"We need to get various forms of alternative transportation in the central business area. Because it is too congested, it's hard to get around. People are losing productivity because they're either walking or they're waiting on an Uber," he said.

Brookins also said scooters can help consumers save on surging rideshare costs. He wants to see at least two to three scooter companies be part of an expanded a program in almost every neighborhood.