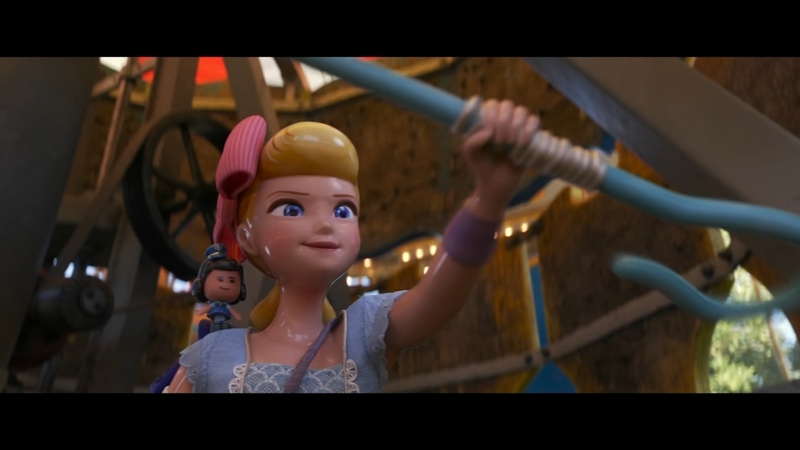 "Toy Story 4" hits theaters Thursday with the return of an old and one new faces, but one is not quite a toy.

ABC7's Janet Davies spoke with some of the cast members ahead of the premiere.

Not seen since "Toy Story 2," Woody's love interest Little Bo Peep, returns in the new film. Annie Potts, who voices Little Bo Peep, said the character has gone on the road, and is a changed woman.

"She's been given up, given away, sat on a shelf, freed herself and now she's sort of homeless but not helpless. She has roared into her new transformed self in love and acceptance with humor and grace and can do attitude. What's not to love," Potts said.

Janet Davies: You've done voice over work before, what is it like to watch, to listen to yourself onscreen and see that animated thing with your voice?"

Potts: "It's a little bit like when if, having the experience in theater of watching your understudy go one for you; you don't quite look like me, but you're saying my lines. I was watching Bo do all these things on screen and I thought, 'wow I wish I could do that,' wait it is me! It's fantastic, it's confusing, it's divine."

Davies: "This is a hot period for you right now - isn't it?"

Potts: "I'm having a really good couple of years here, which is unusual in my age bracket. I am very aware of that, and I'm so thankful for it because aside from my children, there is nothing I love more than to work."

Actor Tony Hale's character is new to the "Toy Story" gang. 'Forky,' is a utensil, who doesn't really want to be a toy, just garbage, and has no clue what happens around him.

Tony Hale plays a new plaything, Forky, in "Toy Story 4." He discusses his character and being apart of the legendary cast.

"Bo, Bo Bo Bo Bo. That's what I love, even when he says when somebody says Bo Peep, Forky's like what's a Bo? He sees everything new, and that's what fun is; he's a completely blank slate," Haley said.

Forky, with the help of Woody, finally realizes what it means to be someone's toy.

Hale: I've seen kids walking around with Forky dolls. You mention disconnected, it kind of - hasn't connected in my mind I'm a part of that."

Janet Davies: "Chicago, that's where I am from - you shot a movie there?"

Hale: "I shot 'Stranger than fiction years ago there and I haven't been much. I'm around the comedy world so much- I mainly do comedy and everybody's from Chicago and they just love Chicago, so I need to get back there," Hale said.

But first, Hale's getting his cutlery vocal chops on the big screen in "Toy Story 4."

Hale: "These characters have been around for 25 years, so to be a character introduced in this franchise is just a gift."

Davies: "And you're the trashy one."

Hale: "And I'm the trashy one; I'm supposed to be in the trash. I have kind of the same importer theory that Forky does, where it's just like, I don't know - why am I here, I'm with legends. =This is a legendary franchise did they make a mistake."