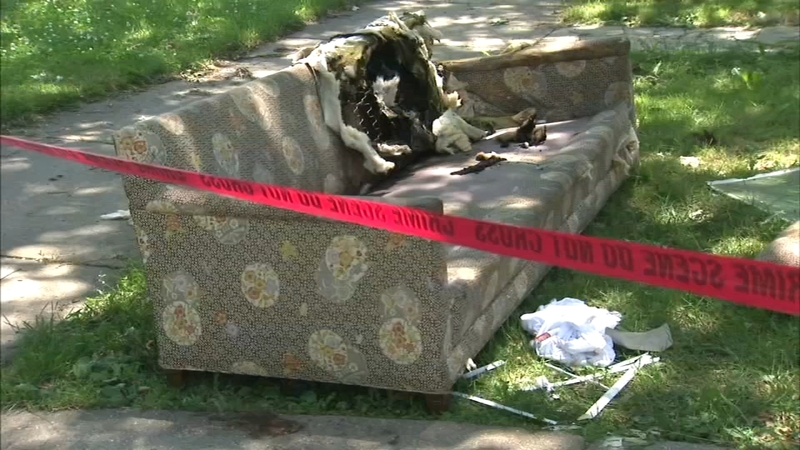 "It was like a movie. It was something that was unexplainable," Aarynae Morales said, describing the terrifying moment she woke up to thick, black smoke and soon realized it came from an explosive device.

"Someone threw a bomb in my home," she said.

Morales, who lives with her family on the first floor of a duplex in the 1400-block of Brown Street, said she was asleep last night, but her boyfriend witnessed what happened.

"He heard everything, he saw the bomb come in," Morales said. "By the time I woke up, he was kind of unconscious."

Morales said the device was thrown in through a window to her 3-year-old son's room. It turns out, her son was in the living room sleeping on the couch, which was starting to burn.

"I heard the mother calling for help; the other neighbor's already running out here," one witness said. "Mom was trying to get out the window; she handed us her kid, and then she came out. There was someone else inside."

"I see the girl from here screaming for help. Two guys, the neighbors helped to take her out and to take out the little kid," neighbor Lupe Calderon said. "They had to jump through the window. I didn't see fire; I just saw the smoke."

"I'm just thankful that we're here and alive and thankful we made it out," Morales said.

The late night explosions stunned residents of the quiet neighborhood.

"I jumped up and I ran downstairs and I said to my daughter, something has happened, I heard a boom. She said 'No, that's fireworks.' I said, 'No, no, no, this is not that sound,'" neighbor Celeste Hudgins said.

The fire was quickly put out. Early Wednesday afternoon, Evanston police returned to the scene with the state fire marshals' office and the ATF to investigate whether this was intentional.

"Any indication this was targeted, that's definitely a possibility it is intentional, we are investing as such," said Cmdr. Ryan Glew, Evanston police. "But with regards to motive and the specific target, that's still part of the investigation."

A neighbor who did not want to be identified told ABC7 she was parking her vehicle in the alley Tuesday night when she saw a suspicious person breaking one of the home's side windows. A few minutes later, she heard an explosion.

The family living downstairs is said to have suffered only minor injuries. Two men living in the upstairs apartment were also able to get out uninjured with help from first responders on the scene.

Boarded-up windows, a burnt sofa and broken glass could be seen near the home later Wednesday morning.