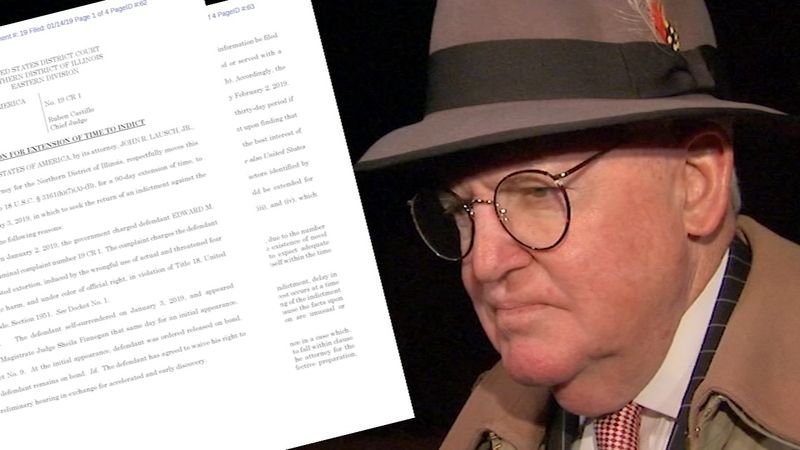 By the time the snow melts in Chicago, city council strongman Ald. Edward Burke (14th Ward) could be facing a federal corruption indictment.

That is the plan by federal prosecutors, according to newly-filed court papers on Monday.

U.S. Attorney John Lausch is asking for a 90-day extension to put the investigation in order for a grand jury to indict Ald. Burke.

In a motion for more time, Lausch says he needs until May 3 to ask a federal grand jury to hand up an indictment against Burke.

The investigation that has already rocked Burke, Chicago government and the upcoming city election, resulted in Burke's arrest on Jan. 3.

Prosecutors, who typically present criminal cases to a grand jury and then ask for indictments, say they need additional time to work out details due to "the complex nature of this public corruption case."

He has denied any wrongdoing.

Burke's attorneys did not immediately respond to I-Team requests for comment Monday on prosecutors' angling for a federal indictment.

As the federal investigation continues, it is also possible that a grand jury could be asked to lodge additional, new charges against the legendary 14th Ward alderman who is married to a state supreme court justice.

Burke stepped down as City Council Finance Committee chairman shortly after the complaint against him was filed, but he has held on as alderman and is still running for re-election next month.

Burke was to appear in court Friday for a preliminary hearing to determine whether there would be probable cause to proceed. That court date has been scrubbed and a judge is expected to grant the delay requested by prosecutors so they can move forward on a grand jury indictment.
Report a correction or typo
Related topics:
chicagoindictmentpoliticsi teamextortioninvestigation
Copyright © 2021 WLS-TV. All Rights Reserved.
I-TEAM
Reopening Illinois: Chicago, suburban businesses see busy day
Scammers are diverting whole IDES checks into their bank accounts
Chicago police returning to extended shifts and no time off
Woman gets FOID card with wrong picture after yearlong wait
TOP STORIES
10 shot, 1 killed in Chatham shooting: CPD
Chicago boy who tried to kill himself after being bullied dies at 13
IL reports 268 COVID cases, 15 deaths
19 shot, 2 fatally, in Chicago weekend shootings
What mom, daughter did with 80,000 penny child support payment
Six Flags settlement $36M for lawsuit over fingerprints
Fruit and vegetables that can help you stay hydrated this summer
Show More
CPD officer charged in Jan. 6 attack on US Capitol
Alton Sterling's kids accept $4.5M settlement after fatal police shooting
Lawsuit: Cop causes pregnant woman's car to flip over using PIT maneuver
FL supermarket shooter posted to Facebook about killing people: Sheriff
Teen who survived COVID after lung transplant encourages shot
More TOP STORIES News