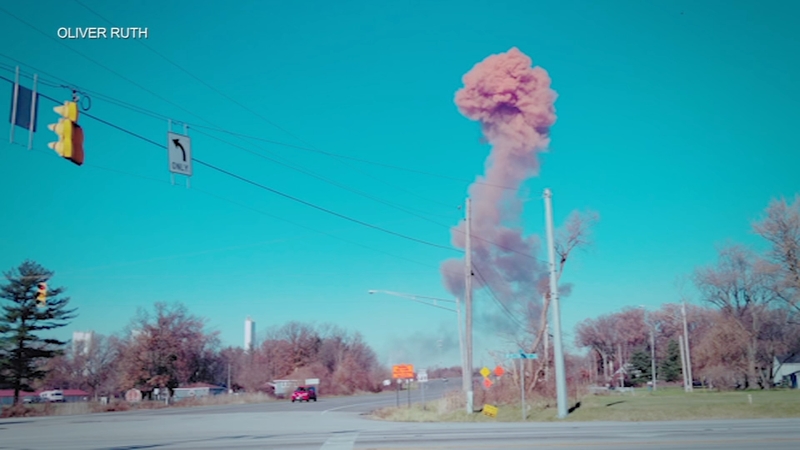 BURNS HARBOR, Ind. (WLS) -- A massive explosion at a steel mill rocked the and the surrounding community in Northwest Indiana Tuesday afternoon.

Residents and business owners said the explosion shook their homes and shops at around noon.

Cleveland-Cliffs spokeswoman Patricia Persico said the blast took place in a slag pit at the mill along the Lake Michigan lakeshore in Porter County. The mill itself was not involved. Steel slag is a molten liquid byproduct of the steelmaking process, and it is taken to pits where it solidifies as it cools.

William Arney is the fire chief in Burns Harbor, a town of 1,200 surrounding the big former ArcelorMittal plant, Cleveland Cliffs bought it last December. It sits adjacent to the Indiana Dunes National Park.

"I was sitting in my office and felt the building shake, went outside, saw the plume of smoke, immediately started to head that way," said Arney.

The Burns Harbor Fire Department responded to several reports of an explosion and fire at a steel plant on Tuesday afternoon.

The local fire crew plus others from nearby jurisdictions, as well as the plant, raced out to the slag pit. It took about two hours to extinguish numerous fires that flared in the 90,000 square foot space.

Silica in the slag contacting moisture resulted in a chemical reaction and explosion.

A plume of smoke in the sky could be seen for miles. The red smoke indicates it was iron burning.

No one was injured in the explosion.

"The community was not at risk. For that to get outside of the gates of the mill is very, very, very unlikely," Arney said.

The company said it's now investigating a cause.