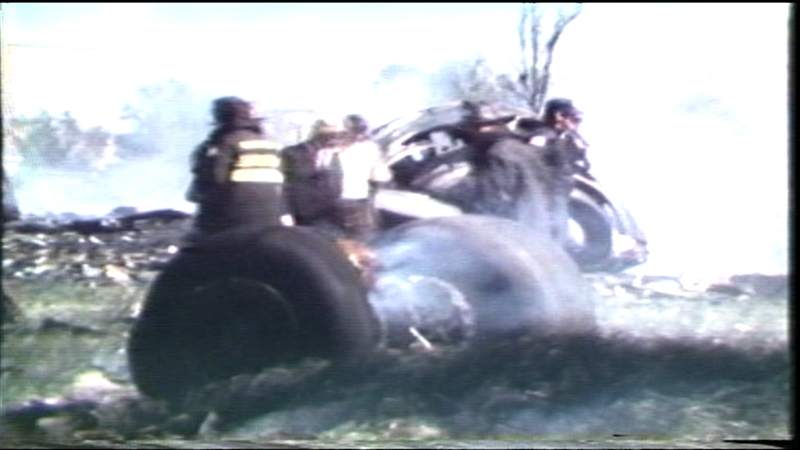 Vicitims of Flight 191 remembered on 40th anniversary of crash

Today, the children of a Chicago couple on that flight have organized a ceremony to remember the 273 people who lost their lives.

Thirty-one seconds after Los Angeles-bound American Airlines Flight 191 took off from O'Hare, it crashed, killing all 273 people on board.

Ivelisse Rios-Lopez shares how she lost her aunt, uncle, and cousins on Flight 191 when she was 14 years old.

The names are read out and the etchings in brick commemorate the lives lost 40 years ago Saturday when Flight 191 plunged to the ground just off Touhy Avenue after losing an engine on take-off. Getting a proper tribute to the tragedy has been a long time coming.

It's been 40 years since Melody Smith, Kim Jockl and Jim Borchers lost their parents, Jim and Corrine Borchers.

"I knew this would be difficult for our parents' names were never accurately listed in full," said Melody Smith.

"My dad, being in World War II, had always wanted to go to Hawaii, so they decided this was their way, way overdue honeymoon," Kim Jockl said.
After confirming the horrible news through a travel agency, it was the oldest, Melody, who told her younger sister and brother.

"There are thousands of flights every day, it can't be them. Eventually I got the call from Melody," Jim Borchers said.
"I really didn't believe they had it all wrong and people probably hadn't died, maybe people were injured," Jockl said.

Reality set in and for years after the crash, the Borchers children grieved on their own. Back then, there were no memorials or support groups connecting families of victims. American Airlines never even released a list of the 273 names.

"You knew there were a lot of people who knew what you were going through, but there was no way to connect with them," Jockl said.

Thirty-one seconds after Los Angeles-bound American Airlines Flight 191 took off from O'Hare, it crashed, killing all 273 people on board.

For the disaster's 25th anniversary, Jockl and Smith made it their mission to connect by using some old school research to find families.

"By the time of the 25th, we had found and made contact with about 25 families and only 15 showed up," Jockl said.

The families returned to the crash site for the first time. While it was a moving experience, it wasn't enough.

A few years later, some 6th graders from Chicago's Decatur Classical School, where Kim was a vice principal, chose the crash as a civics project. From that project came the idea for a memorial, which became reality in 2011.

These students, now 21, did much of the research to get the names from the manifest and design a memorial that a decade later has come to life, remembering lives lost.

"Our whole sixth grade class worked together to contact people who had been affected by the plane crash and to get organized and find a spot and to get the materials - all the necessary things to get a memorial to remember what happened," said former student Lina Kapp. "I think it speaks to how committed we were to the project to helping the people who did not have a sense closure about this."

"To be actually standing in a place nine years later is unbelievable," said Ryan Wangman.

At today's event were witnesses to the crash.

"I saw it from the air and drove over there right away and I saw the situation and they described it on the radio," said accident witness Tom Combs.

James Gilliam, who was 19 at the time, was supposed to be on the flight but changed his plans 48 hours before the fateful takeoff.

"I want to come out I have met some of them families and tell them that story let them know I am praying for them because for some reason my life was spared two days before the flight took off," said James Gilliam.

Tucked away in Des Plaines Lake Park, bricks bear the names of all the victims who died together in America's deadliest airline disaster.

"This is peaceful, it is beyond expectations of what those 6th graders did," Smith said.