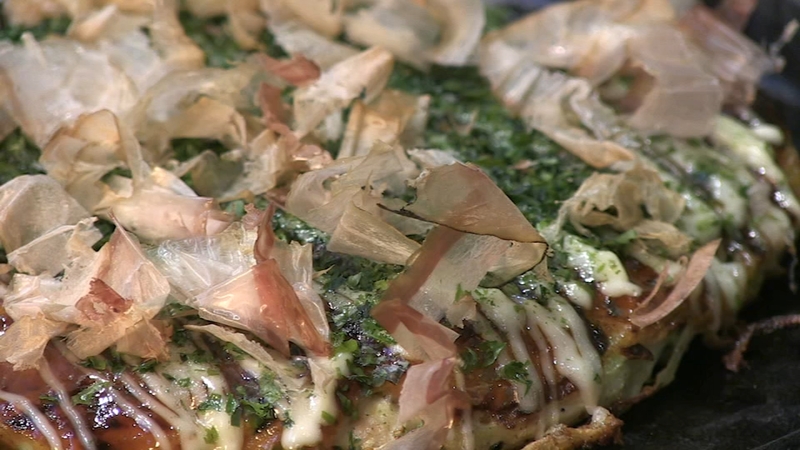 CHICAGO (WLS) -- The Japanese dish known as okonomiyaki was created in Osaka. And ever since our Hungry Hound traveled there a few years ago, he's been wondering why this savory pancake - made with cabbage and your choice of beef, pork or seafood - hasn't taken off in Chicago.

"Okonomi" means "what you like" so of course, you can customize these pancakes to your taste. He said the good news is one of Chicago's best chefs, known for restaurants like Vie in Western Springs and Vistro in Hinsdale, recently opened a place in the West Loop dedicated to okonomiyaki.

Paul Virant is spending a lot of time behind the griddle of his latest restaurant, Gaijin, which sits beneath the Morgan Avenue stop on the CTA Green Line.

His singular focus? Okonomiyaki. A savory cabbage pancake with origins in Osaka, Japan. The reason he opened the restaurant? His wife.

"She studied Japanese in college at Duke, lived there for a semester, fell in love with okonomiyaki, introduced me to okonomiyaki when we first started dating in Chicago in '96," he said. "There are two distinct styles. The original hails from Osaka where all the ingredients are all mixed together. Cabbage, scallions, some kind of a liquid, typically it's dashi; pickled ginger, tempura flakes, egg, flour, and then that's all cooked on a teppan or griddle."

In some cases, the proteins are mixed up as well, such as pulled chicken leg and thigh meat. The pancakes are bound with dashi - a soup stock that forms the basis of most Japanese cuisine - typically made from a type of seaweed and preserved tuna. Shaped and flipped, the pancake gets four unique toppings, and just before being served: a brush of okonomiyaki sauce.

"It's basically their homemade version of Worcestershire sauce," said Virant. "But it's kind of a sweet and sour barbecue sauce."

Then a drizzle of Kewpie mayo; a handful of aonori, another type of dried seaweed, and finally, a handful of bonito, the smoked and dried skipjack tuna found all over Japan.

Take note of how these thin wisps of tuna shimmy as if they're still jumping in the ocean.

The other style is from Hiroshima, which is a more layered affair. Thin batter is topped with bonito and mung beans, a handful of scallions and cabbage, then, if you choose, maybe some slightly rendered bacon across the top. Flip it over, then get out the yakisoba noodles, boil them for about a minute, and after you drain, cook them on the griddle with yakisoba sauce. Cover that mound of noodles with the pancake, then do the same thing to a partially cooked egg. Finally, flip the whole mess over and repeat the same four toppings like the Osaka version.

At the table, you'll need a tiny spatula to cut up these massive pancakes, but the mess and the riot of flavors delivers a unique punch of umami, or savoriness, plus a riot of textures from everything going on inside.

Up until now, most of the Japanese food experience in Chicago has been limited to sushi, ramen or yakitori skewers, but now, thankfully, a taste of Osaka with one of the world's great savory pancakes.